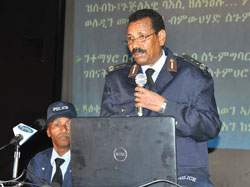 The Commander of the Police Force, Col. Mehari Tsegai called for enhanced role on the part of school administrations and students as regards crime prevention.

Asmara, 16 February 2014 – The Commander of the Police Force, Col. Mehari Tsegai called for enhanced role on the part of school administrations and students as regards crime prevention. He made the call at a seminar he conducted in Asmara city with school directors and supervisors in the Central region.

He further pointed out that the seminar is aimed at doing away with instances of crimes among student communities on the basis of strengthening partnership between Police and school administrations, in addition to exchanging views to this end.

Accordingly, an extensive promotional campaign would be conducted this year targeting schools, while the office is due to exert efforts in a bid to promote societal security through community-based activities, besides raising popular awareness regarding law and upgrading human resource capacity.

In the course of the meeting, the collaboration of communities was described to be active in processes of crime investigations

over the past year, and a call was made for higher communal involvement as regards keeping intact cultural values.

Moreover, Col. Mehari noted the need of putting up increased endeavors towards reducing the number of traffic accident cases and popularizing safe driving, as well as nurturing virtuous youths.

Also speaking at the meeting, Ms. Halima Mahmoud, head of the Education Ministry’s branch in the Central region, said that teachers should assume greater responsibility in this regard, and that the seminar is of vital importance in making further impact.

The participants of the meeting put forth views focusing on a number of issues, and called on teachers to demonstrate more diligence as regards halting the psychological war targeting the youth.