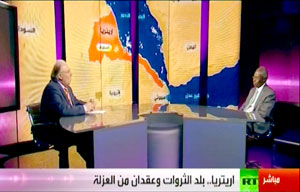 Mr. Yemane Gebreab, Head of Political Affairs at the PFDJ, said that the current official visit of Foreign Minister Osman Saleh to the Russian Federation is an integral part of Eritrea’s active diplomacy.

Asmara, 18 February 2014 – Mr. Yemane Gebreab, Head of Political Affairs at the PFDJ, said that the current official visit of Foreign Minister Osman Saleh to the Russian Federation is an integral part of Eritrea’s active diplomacy.

In an interview he conducted with the Arabic language TV service of Russia Today, Mr. Yemane expressed Eritrea’s desire for Russia, as a great and influential nation in the international community, to play effective, active and constructive role in the Horn of Africa. Indicating that Russia’s passive stance for over a quarter

century in the region has given rise to negative consequences, the PFDJ official underlined the need for Russia’s enhanced role in the region for the prevalence of peace and stability.

He further pointed out that the current visit of Mr. Osman Saleh is mainly aimed at holding discussion as regards regional and international issues of mutual interest, in addition to expressing Eritrea’s desire to foster relations of partnership in the domains of trade, investment, education, culture and others. The role of Russian firms is vital in this regard, and mutual agreement has been reached as regards achieving concrete bilateral cooperation, Mr. Yemane elaborated.

It is to be noted that Foreign Minister Osman is on a 4-day official visit to the Russian Federation at the invitation of his Russian counterpart, Mr. Sergei Lavrov.

In their meeting yesterday, the two officials asserted that Eritrea and Russia share similar views and stances as regards major regional and international issues, besides agreeing to work jointly towards ensuring peace and stability in the Horn of Africa, as well as combating terrorism and acts of extremism.