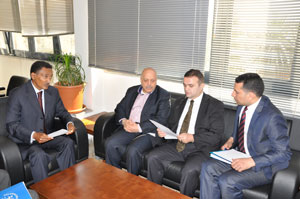 Building a strong relationship and creating a viable ground for mutual cooperation is what the NCEW has been committed for. Thus, creating a fertile ground between counterpart unions has been among the its major activities. The role workers play in the development of economic progress in any given nation is indeed a decisive factor towards creating a strong nation.

NCEW has been striving to promote international solidarity and cooperation among different trade unions. The main task of the NCEW is to promote the interests of workers, in cooperation with like-minded trade union organizations. In continuation of its efforts to promote ties with regional and international organizations, the NCEW has attended a conferences organized in Turkey and has reached agreements to reinforce ties between the two parties. Reports of the NCEW indicates that during its three visits to turkey and especially that of October 2012 was an occasion where the NCEW and HAK-IS signed an agreement outlining important areas of cooperation including exchange of visits and sharing of each other’s experiences.

Thus, recently a high level delegation of Trade Union Confederation of the Republic of Turkey (HAK-IS) has visited Eritrea. According to Mr. Tekeste Baire, General Secretary of the NCEW, the recent visit by HAK-IS is an outcome of the mutual interest and persistent efforts exerted by both parties to build strong ties that benefit the two countries and their trade union organizations .
The conference recently held at NCEW’s meeting hall has a tour arranged to Massawa and has gaven the Turkish trade confederation an opportunity to acquire good knowledge of the country and its people. It was indeed an opportunity to personally experience a unique beauty of buildings constructed during the Ottoman Turkish period which are remnant relics that are standing a historic event.

workers and the need to make it fully functional.

As part of its ongoing efforts to strengthen ties the NCEW has also been maintaining strong cooperation and solidarity with several national, regional, and international trade union organizations such as OATUU, ITUC, and TUFEA.

The agreement reached between NCEW and HAK-IS includes establishment of mutually long-term relations and reciprocity by taking into account assuring reasonable labor conditions and promoting international understanding, positive change in the regional and international situation, far-going changes in the world economy.

What is more is that the exchange of delegations to learn the experiences of labor condition and trade union activates, building mutually beneficial relations between the peoples and organizations of the two countries, exchange of literatures, newspapers, magazines and other materials regarding labor and confederations activities, providing consulting services as well as training for members of the tow countries confederations, exchange of work programs as well as assisting with the facilities and equipment issues as well as exchange of information about each other’s recent development of social policies  is an agreement reached by the two parties.