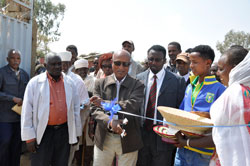 The inhabitants of Eimi-Haili sub-zone have constructed school fence in Kudob’ur, at a total expenditure of 2 million and 300,000 Nakfa.

Dirko, 21 February 2014 – The inhabitants of Eimi-Haili sub-zone have constructed school fence in Kudob’ur, at a total expenditure of 2 million and 300,000 Nakfa.

Speaking at the inauguration ceremony during which the Minister of Education, Mr. Semere Russom, was present, Mr. Solomon Girmai, school director, indicated that the fencing of the school is vital as regards ensuring conducive environment for the teaching-learning process, and lauded the initiative taken by the inhabitants.

Mr. Berhane Mengesha, Administrator of the sub-zone, stated on his part that the community members have been extending communal support in various activities of this type, including construction of more class rooms and ensuring incentives for teachers.

Likewise, Mr. Franco Kubaba, Head social service in the Southern region, called on the inhabitants to demonstrate an equivalent spirit of boldness with a view to raising the scope of school registration in the sub-zone, in addition to nurturing the virtue of discipline among students.

Among the inhabitants, Sheikh Saleh Aman and Ms. Mulu Okbasilasie expressed satisfaction with the fencing of the school which has been serving for many years.

In closing remarks, Mr. Semere Rusom explained that the government has been exerting stepped-up efforts towards promoting educational outreach both in urban and rural settings, and expressed appreciation for the community’s input.

Central region: Micro-credit and Saving Program’s branch in putting up endeavors in a bid to improve communal livelihood