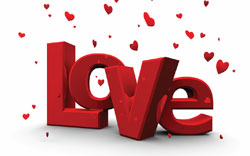 Though it is not an official national holiday in many countries just like here in Eritrea, seems like a lot of us quite never fail in making proud whoever it was: whether a god, saint or a romantic court-man, that designed the day of love.

Each year on February 14th, many people exchange cards, candy, gifts or flowers with their special “valentine.” It is a festival of romantic love, a love extravaganza for some in which many people give presents of different types to their spouse or partner. They may also arrange a romantic meal in a restaurant or night in a night club, expensive chocolates, candies, lingerie and champagne or sparkling wine. Nevertheless, some people use the occasion to present lavish gifts, such as jewelries and a whole lot of bling-blings!

People who would like to have a romantic relationship with somebody may use the occasion to make this known, often anonymously. Valentine’s cards are often decorated with images of hearts, red roses or Cupid. Cupid is usually portrayed as a small winged figure with a bow and arrow. In mythology, he uses his arrow to strike the hearts of people. People who have fallen in love are sometimes said to be ‘struck by Cupid’s arrow. He really is a young naughty boy messing with people’s hearts by shooting from up there.

Back in the days unlike so many lazy folks like us of today whom choose to buy cards or worst again send an SMS and save some time and effort letting the “status updates” take care of our feelings; people from the past used to express their love with a lot of care and effort. Maybe some soulful hand-written letters and I sometimes picture court ladies and gentlemen composing some long, long, long melodies for their valentine. Though this is just a work of my imagination, verbal and singing valentines began to be replaced by written communiqués in Europe in the 15th century. The first written valentine is usually attributed to Charles, Duke of Orleans, in 1415. It is believed he passed the time by writing romantic verses for his super lucky wife. Cards decorated with black and white pictures painted by factory workers began to be created in the early 1800s; by the end of the century, valentines were being made entirely by machines. Sociologists theorize that printed cards began to take the place of letters, particularly in Great Britain, because they were an easy way for people to express their feelings in a period when direct expression of emotions was not fashionable. Manufactured cards notwithstanding, increasingly beautiful handmade Valentines were often small works of art, richly decorated with silk, satin or lace, flowers or feathers and even gold leaf. Some of the more unusual valentines were created by lonely sailors during the Victorian era; they used seashells of various sizes to create hearts, flowers and other designs or to cover heart-shaped boxes… they definitely had a lot of free time to spare! By the 16th century, written valentines were commonplace.

Aside exchanging love letters, bouquets of flowers and boxes of chocolates, for some others there is no better day of the year to exchange the real and actual vows.Tie the knot of the holy matrimony, walking down the aisle protected by Cupid appears to be a superior option for many couples out there. Not to forget to mention all of the individuals out there that I wouldn’t know to define them as pessimistic or extremely rational and realist that don’t care about Valentine’s or simply look like we don’t care because we don’t have one. It may be a non-rational burlesque, another sign of the human insanity but doesn’t love make one quite madly and happily foolish? Or whatever is that goes on in the metabolism of somebody in love: I certainly do know that when those love hearts beats start pounding and thumping the entire rational domain of our minds slowly hibernates.

But who are we doing a courtesy to by going through all of these ups and downs on the 14th of February and why on this specific day out of 365 days of the year? Seems like it is an unsolved mystery… well mystery or not is not a big deal but there is a lot of this day’s clandestine originators out there, there are quite a horde of legends. The common one is  that the day of romance we call Valentine’s Day is named after Christian martyr and dates back to the 5th century, whom secretly tied the Knot to a secret and utterly in love couple; some kind of Romeo and Juliet episode. But the variance comes when we count the saints called Valentine in the Christian hierarchy. Archaeologists, who unearthed a Roman catacomb and an ancient church dedicated to St. Valentine, are not sure if there was one Valentine or more. Today, the Catholic Church recognizes at least three official different saints named Valentine or Valentinus, all of whom were martyred on February 14; at least two of those in Italy during the 3rd century. The most popular candidate for St. Valentine was a 3rd century Roman priest who practiced Christianity and performed secret marriages against direct orders from Emperor Claudius II, who believed single soldiers were more likely to join his army. Legend has it that Valentine sent a friend (the jailer’s daughter) a note signed “From Your Valentine” before he was executed on February 14 in 270 A.D., as sweet as it sounds that phrase is still used prominently on today’s cards!!!

But hold on… the romans have some other legends; they would not give away the trophy to several Valentinus guys. There was an ancient pagan fertility celebration called “Feast of

Lupercalia”, celebrated to honor Juno, queen of the Roman gods and goddesses also a goddess of women and marriage, the celebration was held on February 14, the day before the feast began. During festival time, women would write love letters, also known as billets, and leave them in a large urn. The men of Rome would then draw a note from the urn and ardently pursue the woman who wrote the message they had chosen.

We could also date the love day back to the medieval ages, when medieval began to send love letters on the 14thbelieving that birds and bees begin to mate on February 14, it was somehow a picture-perfect through which express love. Either ways early Christians were understandably happier with the idea of a holiday honoring the saint of romantic causes than with one recognizing a pagan festival so in 496 A.D., Pope Gelasius named February 14 in honor of St. Valentine as the patron saint of lovers. In 1969, Pope Paul VI dropped it from the calendar. However, though it would make Pope Gelasius furiously angry and mad if ever alive… the blend of Roman festival and Christian martyrdom had caught on, and Valentine’s Day was here to stay and be excitingly celebrated every other year!

Yes, Valentine’s Day is not a public holiday. Government offices, stores, schools and other organizations are open as usual. Public transit systems run on their regular schedule. Restaurants may be busier than usual as many people go out for an evening with their spouse or partner and we need to be present at work and keep on with the busy schedule just like other days and can’t take a day off but it is Valentine’s Day for good sake! There is a lighter air that gets to be annoyingly heavy for few others. We like celebrating this day don’t we? Or simply make fun of all of those fools in love… celebrating or not it is definitely a day worthwhile in our calendars!

Debre Sina: Pilgrimage to One of the Oldest Eritrean Monasteries Part II