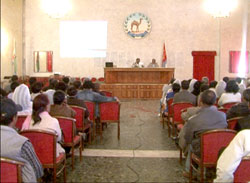 Asmara, 22 February 2013 – The Assembly of the Central region yesterday conducted regular meeting at Asmara City Hall. Speaking at the meeting, Mr. Abraham Semere, Chairman of the Assembly, pointed out that significant accomplishments have been registered in line with the decisions adopted on the previous meeting as regards following up public issues and others, while communal collaboration was described as significant in this connection. He further indicated that the Assembly is working on priority basis as regards human resource development, and called for sustained endeavors in a bid to promoting transport

outreach, as well as soil and water conservation.

According to the reports presented at of the meeting, increased efforts have been exerted towards raising horticultural output, as gratifying achievement has been made pursuing supply of potable water in rural areas.

The Assembly members exchanged views on the agenda items and put forth views in connection with enhancing popular role in the preservation of cultural heritages, giving impetus to sports activities vis-à-vis upgrading playgrounds, as well as furthering water management, among others.

Potable water supply facility put in a place in Teareshi