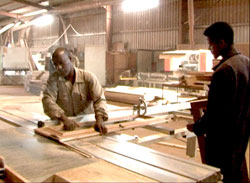 Sembel Wood and Metal Works, here in the capital indicated that it is striving to attain higher production capacity through introducing new machinery.

Asmara, 22 February 2013 – Sembel Wood and Metal Works, here in the capital indicated that it is striving to attain higher production capacity through introducing new machinery.

Mr. Gebregziabher Asmelash, Manager of the institution, said that it is conducting continued on-the-job trainings following the introduction of new digital machines, while greater efforts are being exerted with a view to meeting the growing demand for hangar construction materials and office equipment. He further disclosed that the establishment has created job opportunities for a total of 2,500 nationals including in its nationwide branch offices. Accordingly, one of the growing concerns of the

Among the employees, Mr. Fisehaye Berhe and Mr. Tesfatsion Jinai stated that the institution’s working environment stresses exchange of experience among employees, and that bicycles are one of its previous gratifying product lines.

Likewise, Million Yemane and Tirhas Eyasu expressed satisfaction with the investment the Wood and Metal works plant is making on youth employees, and stated that the skill knowhow they have acquired is vital to their future.