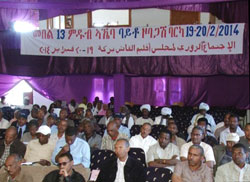 The Assembly of Gash-Barka region has conducted it’s13th regular meeting on the 19th and 20th of this month in Barentu city.

Barentu, 24 February 2014 – The Assembly of Gash-Barka region has conducted it’s 13th regular meeting on the 19th and 20th of this month in Barentu city.

Speaking at the meeting, Mr. Osman Mohammed-Ali, Chairman of the Assembly, gave briefings as regards the accomplishments made concerning health, education, agriculture, potable water supply, environmental hygiene, sports and others vis-à-vis the plan drawn up during the previous meeting. He further called on government bodies to put up more endeavors towards registering still more gratifying outcome on the basis of keeping intact the proven merits.

The Assembly members put forth views based on the reports presented during the meeting, and identified priorities which need further attention such as environmental hygiene, soil and water conservation, prevention of deforestation, as well as reinforcement of youth centers, among others.

In closing remarks, Mr. Mohammed Hamd, Administrator of the region, outlined the achievements registered in 2013, as well as the work plan for 2014. He also urged the Assembly members to enhance role in a bid to enhancing the prevailing popular participation in development activities.