“As We Had Proactively Reserved Enough Cereals, the Effect Of 2013’s Inadequate Rainfall Has Been Significantly Minimized” President Isaias 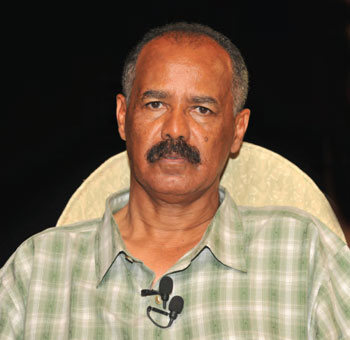 It  is  to  be  recalled  that  H.E. President  Isaias  Afwerki conducted  an  extensive  interview on  the  9th  of February  2014,  in  the  port  city of Massawa with  the  national  media  outlets on  the  occasion  of  the  New  Year 2014,  regarding  the  overall situation  of  the  country  and  also the  regional  state  of  affairs  and future  scenarios. Excerpts of the first part follow:

-As  this  interview  is  being conducted  on  the  occasion  of New Year, I would like to take this opportunity  to  wish  you  a  happy and  prosperous  New  Year.  Since New Year is often part of the year when  new  plans  are  commenced, the interview is mainly associated  with  future  plans, especially  of that 2014 .  As it can be confirmed from the reports and evaluation of the Ministry of Agriculture, last year’s harvest was not satisfactory due to inadequate rainfall.  Therefore, what has been planned for enhancing food reserve for 2014?

When it comes to rainfall in our situation, it is difficult to talk about food  security  and  agricultural plans  year  by  year  because  of inadequate annual rainfall in terms of  magnitude  and  coverage.  This problem is associated with clime change.  It  may  not  be  impossible to  assess  this  situation  based  on the  magnitude  and  coverage  of annual  rainfall.  But in this case, our assessment should not be limited to this situation only. While assessing the effectiveness of our food security endeavors, we should take into account our rainfall-based agricultural activities and what can be achieved thorough irrigation programs. Since the annual rainfall in  Eritrea,  as  I  said  earlier,  is inadequate  in  terms  of  magnitude and coverage, it is not dependable to base our food security plans on the annual rainfall we are endowed with. Hence, we should transform our agricultural endeavors by introducing irrigation programs. In  this  way  what  we  may  achieve through  agricultural  activities  that are based on annual rainfall can be complemented  through  what  can be  achieved  by  way  of  irrigation systems. The point is for agricultural programs to be sustainable, they need to be comprehensive.

However, such comprehensive plans cannot be realized within a year.  By  assessing  the consequences  of  dependence  on rainfall-based agricultural produce, we need to consider the alternatives and  conditions  for  considerably enhancing  our  irrigation  programs so  as  to  ensure  food  security  on sustainable  basis.  Last  year’s  as well as the previous years’ rainfall was  inadequate  when  judged in  terms  of  meeting  our  food demand.

People may tend to say that there may be good harvest whenever there is adequate rainfall in a particular rainy season.  However,  we  need to  take  into  account  the  different types  of  food  items  that  may  be produced.  Food  security  should be  assessed  in  terms  of  producing the  different  types  of  food  items that  are  needed  in  a  country.  It is also good to note the way different cereals and other food items are consumed.  Not  only  cereals, but  meat,  fish,  dairy  products, sugar  and  other  secondarily important  agricultural  products should  be  also  considered  in  the attempt  of  assessing  food  security comprehensively.  Therefore, each food  item  needed  in  the  society should  be  assessed  in  terms  of  its sufficiency. However, it is not that possible to have a perfect package of all types of cereals and other food items whenever there is dependence on the amount of annual rainfall   and given the arable land available and its quality (level of fertility) as well as the availability of important inputs such as fertilizers and other factors that sustainably increase productivity.

As  I  said  earlier,  it  is  important to  consider  the  efforts  associated with  introducing  irrigation programs.  There  may  be  some successful  irrigation  programs that we could  assess  one  by  one. These  things  have  to  be  assessed by  taking  into  consideration  the soil and water conservation efforts such  as  building  diversion  canals and  dams.  But  it  will  take  time  to introduce  the  technology  required for effectively using all potentially irrigable  land.  Even  the  projects that  are  at  hand  are  small  ones when  we  think  in  terms  of  what we  intend  to  do  and  what  we  can potentially do.

It  is  good  to  have  a  mix  of agricultural  activities  that  are based  both  on  annual  rainfall and  irrigation  systems.  The problem in the case of irrigation systems is that having in place the required infrastructural inputs is a considerably demanding task.  We need  to  think  not  only  about  the water conservation endeavors (like building dams and the like) but we should  also  think  in  terms  of  the electricity required for the effective implementation  of  potential irrigation projects. We should also consider the available options associated with irrigation systems and come up with an option that is relevant for our case.  In  this  case, it  may  not  be  advisable  to  limit our  focus  only  on  projects  that produce the food items we need. It is also important to think in terms of the potential for producing other marketable items so that it will be possible to buy food items with the money earned in such a way.

Our  plans  should  be  assessed in  terms  of  the  progress  in irrigating  the  potential  land available  for  irrigation.  We have three development zones in the country. One  has  to  think  about the  progress  that  is  being  made  in each development zone, in relation to  having  in  place  the  required infrastructures  such  as  dams, diversion  canals,  and  the  like.  In other  words,  the  implementation process  associated  with  such projects  has  to  be  assessed  yearly. For  example,  so  far  no  dam  has been  built  in  the  Northern  Red Sea  Region.  Thinking  in  terms  of the area extending from the Sudan border  to  the  environs  of  Erafaile, how many dams can we build if we are  to  make  an  effective  use  of  all the water that flows to the sea and wasted  elsewhere?  If  we  roughly estimate  that  there  may  be  60,000 to 80,000 acres of land that can be potentially  cultivated  in  aforesaid area, we have not conserved enough water  that could enable  us  to  reach  this potential.

When  it  comes  to  the  highland, we  need  to  think  in  terms  of  the agricultural  infrastructures  that have  been  actually  established and  what  can  be  potentially  done in  the  area  extending  from  the border of Sudan to the border of Ethiopia. The same also applies to the western zone. Thinking in terms of  food  security,  if  all  these  things are  potentially  realized,  we  can  be more than self-sufficient.

We  are  saying  that  it  is  not possible  to  ensure  food  security given  the  amount  and  coverage  of annual  rainfall  we  are  endowed with. We are also saying that given the  infrastructural  inputs  required for  introducing  effective  irrigation systems,  it  takes  a  long  time  to effectively  introduce  the system  for  complementing  what can  be  produced  depending  on annual  rainfall.  Therefore, it is imperative to have food reserve for filling the gap in our demand for food items. Compared to what is done in the  case  of  some  other  countries, we  think  in  terms  of  months.  We think in terms of the reserve for strategic food items.  Regardless of  the  magnitude,  we  should  have a  strategic  reserve  of  food  items that are needed in the country. In this case, it is not advisable to think in terms of months.  For meeting our food demands on sustainable basis, we should think at least in terms of what  can  strategically  reserve for a year and if possible for two or three years.  This is good not only for  the  purpose  of  stability  but  it is  also  helpful  for  managing  what we  do  in  a  proactive  manner.  We may  say  that  our  ability  to  keep  a reasonable  food  reserve  has  been improved.  However,  it  is  also good  to  think  or  imagine  that  it may  be  possible  that  there  may  be lack  of  rainfall  at  all  in  an  entire rainy season. The intention in this case  is  to  get  proactively  prepared when  such  an  imagined  situation becomes  a  reality.  As it has been explained above, given our situation, one cannot confidently depend on something that is solely dependent on annual rainfall.  That is  why  proactive  measures  for strategic  reserve  of  food  becomes very  important.  Furthermore,  in addition  to  the  unpredictability  of annual rainfall, there are areas that have  other  problems,  for  example problems  related  to  overall productivity.  Such problems should also  be  considered  in  the  attempt to  have  a  strategic  food  reserve and  addressed  in  an  appropriate manner.

From our experience in 2013, we have enough reserve for 2014. It may be difficult to effectively have  a  reserve  for  every  item,  but there  must  be  reasonably  adequate reserve  for  the  basically  important food items.

Parallel to what we do in keeping food reserve, we should do our best to progressively improve irrigation practices.  Irrigation  practices have  to  be  improved  in  terms  of the  infrastructures  employed  and the  magnitude  of  land  cultivated through irrigation systems.

In the west, there are dams built in the areas extending from Badme to Golij, Gerset, Teseney, Aligidir as well as its environs. But such areas have not been yet used for irrigation purposes to the extent required. The same is also true in the northern part of the country in areas such as Himbol. The constraints in this case are mainly electricity and other forms of infrastructural facilities. Some of these problems can be tackled internally but some others have to be provided externally. The issue of electric concerns needs to be addressed in the first place.  As long as there are no interconnected electricity networks in such areas, we should alternatively think on how to introduce independent electricity power installments or energy sources in the different areas. Manpower  issues should  not  be  also  overlooked  if we  are  to  harvest  twice  in  a  year. There should be also quality seeds. All these things are easier said than done.

To sum-up,  what  matters  more  is how  we  make  what  we  do  more sustainable  and  how  we  make  the measures we take more proactive and comprehensive. There must be also continuously and dynamically progressive improvements.  Our achievements in 2013 must be better than what we achieved in 2012. Similarly, what we should achieve in 2014 have to be far better than the achievements in 2013.  Besides, we need to have proactively and strategically helpful reserves parallel to what we do to improve our harvest in general.