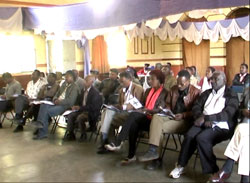 An assessment meeting that focused on the new sweet potato pilot projects in Mendefera, Debarwa and Dekemhare sub-zones was conducted in Mendefera city.

Mendefera, 28 February 2014 – An assessment meeting that focused on the new sweet potato pilot projects in Mendefera, Debarwa and Dekemhare sub-zones was conducted in Mendefera city.

Speaking at the meeting attended by heads of line ministries and service providers, Dr. Ogbazgi Kifle, head of the Agriculture Ministry’s branch in the Southern region, pointed out that sweet potato is the source of rich diet and green feed for livestock.

In a report he presented at the meeting, Mr. Abraham Sielu, in charge of the project’s follow-up, outlined the prevailing challenges in connection with the low demand for the product.

Likewise, research papers presented by experts from Halhale Agricultural Research Institute disclosed that the majority of the country’s areas are suitable for sweet potato plantation, and that the potential harvest ranges from 260 to 630 per hectare with higher yield of green feed. Accordingly, around 19 varieties of cuisine can be served upon utilizing sweet potato.

The participants of the meeting called for increased promotional activities targeting raised awareness on the part of farmers and the general public.

In closing remarks, Mr. Efrem Gebrekristos, Administrator of the region, noted the merits of sweet potato as a source of food, and called on the meeting participants to extend a helping hand to the ongoing venture.