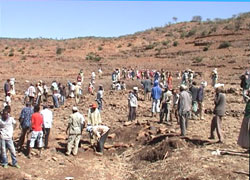 The inhabitants of Areza sub-zone are engaged in raising agricultural harvest through demonstrating higher sprit of communal participation and members of the People’s Army.

Areza, 28 February 2014 – The inhabitants of Areza sub-zone are engaged in raising agricultural harvest through demonstrating higher sprit of communal participation and members of the People’s Army.

Ms. Lichi Mehanzel and Mr. Tesfamichael Weldeslasie, inhabitants of La’elai-Hatsina, Areza sub-zone, indicated enhanced participation is being witnessed in the undertaking which involves terracing and construction of water catchment walls in a bid to raising agricultural output.

Likewise, Mr. Mulugeta Eimehatsion and Ms. Mido Gebremichael pointed out that the undertaking is aimed at raising productivity through conservation activities pertaining to soil and water. They also called on the inhabitant to practice good farming system.

Mr. Melake Fissehaye, expert in soil and water preservation, stated that the inhabitants of the sub-zone are being engaged in extensive soil and water conservation activities to make the agricultural land more useful and productive through the construction of terraces and water catchment walls.

Mr. Andemeskel Adihanom, Administrator of the sub-zone, indicated on his part that the program focuses on backing the nation’s endeavors of ensuring food security. He further called for higher participation on the part of government institutions and communities for the finalization of other similar.