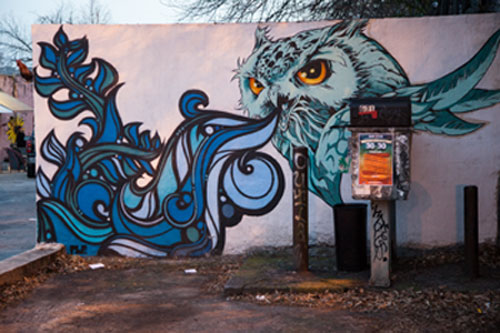 Isn’t it fascinating to be surrounded by marvelous colorful paintings and graffiti’s as you walk down the streets? Even if it’s for some few minutes it surely does feel like for while you get to be immersed in Alice’s wonder land. They’re new refreshing, with messages of great values some might show contempt some make you end up in laughter with their comic touch, some are simply beautiful and some are terrifying… But nobody can deny that they are amazing.

Street art is any art developed in public spaces – that is, “in the streets”, for many the term usually refers to art of an illicit nature, an art of opposition and rebellion (as opposed to, for instance, government or community art initiatives). The term can include traditional graffiti artwork, though it is often used to distinguish modern public-space artwork from traditional graffiti and the overtones of gang territoriality and vandalism associated with it. Street art is seen more in cities, in the suburbs it hasn’t really developed into a big scene yet, so if there is a message that this works carry behind; they deliver it well and clearly obvious.

called slap tagging or just simply slapping. Stickers are usually made with USPS Priority Mail Stickers or using homemade stickers with homemade adhesive. This is very similar to “wheat pasting”.

Rather than using traditional paint or wheat paste methods in a 2D platform, it is used in this process three-dimensional resins. These sculptures come in all sizes and fit in the holes of buildings and pipes found while walking around. The finished shapes represent geodes, crystal, quartz, or any mineral formation that one would normally find in nature, now in our planned out cities.

Many young artists seem to be absorbed in this type of art, it seems like it reflects their energetic and dynamic young soul. And it is also known that in different countries of Europe and the U.S. playing around with color-sprays while watching out for the cops has been one of the youth’s favorite hobbies. And this is when the whole concept of rebellion gets attributed to the street arts, while some of it is made illegally and is associated with vandalism, a large amount of the murals are commissioned and legal.

Vandalism or not, though at the sight of these works almost every single of us subconsciously opens their mouth and remain astonished. Weather it is legal or not the speared colors leave a huge impression in our memories: doesn’t matter if it is bad or good, safe or dangerous; they lug in them some beauty, some artistic attractiveness.

“Whatever signs: small or big, our body gives must not be ignored”