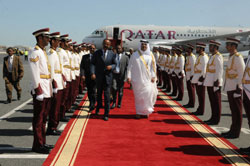 On arrival at Doha International Airport, he was accorded warm reception accompanied by salute of the Guard of Honor.

At a meeting he conducted at the State House with the Amir of Qatar, Sheikh Temim Bin Hammed Bin Khelifa Al-Thani, the two sides held discussion focusing on bilateral ties, relations of partnership and issues of mutual interest.

The President would hold similar meetings with various Qatari Officials in the course of his stay in the country.