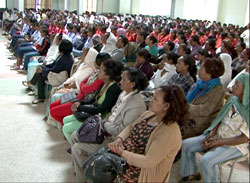 The Employees’ Confederation of the NUEW in the Central region has conducted seminars at Expo Grounds with a view to promoting overall awareness of members.

Asmara, 06 March 2014 – The Employees’ Confederation of the NUEW in the Central region has conducted seminars at Expo Grounds with a view to promoting overall awareness of members.

The seminars involved extensive briefings by various government bodies concerning the challenges of the nation-building process, women’s role in education, women’s revolution for gender equity, as well as globalization and its impact on the youth.

Ms. Mingas Hailai, Chairperson of the Confederation, explained that the program is aimed at inspiring the participation of youth members in various domains, and called on them to demonstrate higher awareness towards doing away with the harmful customary practices affecting women. She also called for enhanced youth awareness in connection with behavioral change in this regard.

Ms. Fanus Fikadu, head of EIT’s Registrar Office, outlined the long standing repressive elements against women’s development, and asserted that the Eritrean armed struggle for independence attests to the fact that gender equity is attained through women’s physical, psychological and other inputs.

Also presenting a study paper at the seminar pertaining to Eritrean women and the traditional society, Ms. Abeba Tikue, in charge of follow-up of ENWVA female members’ affairs, said that the EPLF laid the groundwork for women to assure equality through practical work and heroic feats. She further called on female youths to emulate their charisma.

Among the seminar participants, Ms. Saliha Ahmed, Afrah Yasin and Bethiel Tesfai expressed satisfaction with the seminar, and called for sustaining the initiative.

Restoration of trenches in North-east Sahel shoulders responsibility for youths, Say members of the People’s Army participating in observance of Wiqaw Izz’s demise