“Comrades: we are here invited to attend the funeral of Nadew Iz” 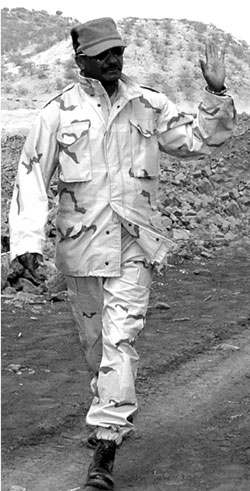 When the demise of Nadew Izz, on March 1988, is remembered the famous saying of Maj. General Gebregziabher Andemariam (a.k.a. Wuchu), Chief of Staff of the Eritrean Armed Forces, resonates in every Eritrean mind. “Comrades: we are here to attend the funeral of Nadew Iz”. When Maj. General Gebregziabher Andemariam said this he was received by his army with ululation and applause. They did not seem they were going to war and some of them to pay their lives.

Nadew Command was considered one of the strongest army of the Ethiopian regime believed to defend and push the Eritrean liberation fighters from their strong holds in Nakfa and end the Eritrean struggle for independence. And when Maj. General Gebregziabher talked with such simple terms to tell his troops about the mission they have been heading for and thinking of what kind of an enemy army they were to confront and destroy we could only learn on how he was bold in his commitment and the strong belief he had on his troops to execute the meticulously planned operation. He knew the capacity of his troops and they had strong belief in his leadership. It has been a great and unbelievable combination.

the military balance in favor of the Eritrean liberation fighters once and for all. The Nadew Command as tough as it has been considered could not resist the advance of the Eritrean liberation fighters even for days. In three days time it was liquidated; many of its members killed and captured and few fled to save their lives. The veteran British historian, Basil Davidson, who had the chance to follow the operation, described it as “Second Diem Bien Phu”.

Comparing to how Maj. General Gebregziabher described the operation and how the veteran historian looked at it we could conclude that the operation had been concluded before it was conducted. And that attests to the operation capacity and war planning of the EPLF leadership.

Maj. General Gebregziabher Andemariam as a soldier has been bold, adamant, decisive and never ready to accept defeat. He as a commander has been well respected by every one who closely knows him. He has been participatory and always ready to listen to his fellow comrades under his command. He as human has been very humane. Many under his command I discussed with describe him as a father always ready to solve personal problems. He has been open to every body and with every body without discrimination of rank and file and gives due response, always setting his mind to solve problems be it personal or otherwise.

Today we have lost this hero of Eritrea of all time. His lose will be felt by every Eritrean. His history and heroic feast he demonstrated during the struggle for Eritrean independence and for safeguarding the Eritrean sovereignty will be remembered for eternity. “Comrades: we are here invited to attend the funeral of Nadew”, in my belief, would be his trade mark in the minds of the Eritrean people.

May God rest his sole in peace!

Eritrean Embassies and communities abroad convey messages of condolence in connection with the passing away of Maj. General Gebregziabher Andemariam