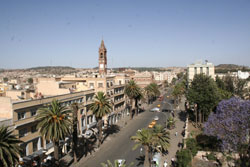 Asmara, the Capital
Asmara with a population of about 400,000 is the capital of Eritrea. Sitting on a plateau 2,324m above sea level Asmara enjoys a pleasant climate all year round.

The city is an old Italian town with picturesque palm-lined boulevards and some of the world’s Art Deco architecture. It boasts neat and well-planned streets, side walk cafes and a wide range of excellent restaurants. Asmara is the safest city to explore at any time of the day or night. “Asmarinos” are famous for their friendliness and take pleasure in welcoming visitors to share in the delights of their city.

Massawa capital of the Northern Red Sea region houses the port of Massawa. It has ancient coral

buildings and arcades that reflect the Turkish influence, as well as even older mosques that represent Muslim influence and other homes built in the Ottoman style of the 18th century. Here, too, is the old Moorish town, with its splendid shops, arcades, cafes and restaurants.

Massawa us regarded by many as ‘the Pearl of the Red Sea’ and is one of Eritrea’s two ports. The ancient city is a center for the many activities available on the Red Sea coast and plays host to the many sun and fun seekers that visit the coast all year round. With its exquisite Turkish-style architecture and shopping arcades, beautiful mosques, delicious seafood and famous nightclubs, Massawa is the perfect destination to cater for all tastes. In addition to the city’s attractions, pristine beaches and world class diving and snorkeling from the city center.

Keren capital city nestled amongst seven hills from which it derived its name. 91km north of Asmara and 1,377m above sea level, Keren enjoys a warm climate all year round and, having more leisurely pace of life, is considered to be a more relaxing alternative to the bustling Asmara. However, on market days the city reaches its busiest, as traders come and sell a wide range of wares including straw products, clay pots and jars, silver jewelry and even camels. As well as providing many fascinating sight and experiences, the market is a must for gift-seekers. Keren has long played a key role in Eritrea’s history and often attracted foreign explorers such as the Swiss soldier f fortune Werner Munzingter, who arrived in 1855 and married a Bilen girl, the dominant ethnic group in the region. The city comprises of a majority Muslim which gives rise to a distinctly Middle Eastern feel in the city. There are many things to see and do in and around Keren. The famous Madona of the Baobab (Mariam De’arit), the camel market, the British and Italian Cemeteries, and the Old Railway station are just some of the numerous attractions.

“Comrades: we are here invited to attend the funeral of Nadew Iz”