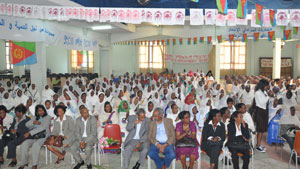 During a ceremony conducted at Asmara Expo Hall in which Ministers, PFDJ officials, members of the regional Assembly and members of the national associations took part, Ms. Teke’a Tesfamicael, chairwoman of NUEW Central region branch, indicated that ensuring gender equality has been one of the policy pillars of the Eritrean Government, and that important programs have been charted out aimed at ensuring strong participation and equal opportunity for women.

She further said that evident change is being witnessed with regards the participation of young women in varied professions, and that strong efforts is awaiting the National Union of Eritrean Women (NUEW) for further consolidating the participation of women in the nation building endeavors.

Mr. Kahsai Gebrehiwot, Administrator of the Central region, stressed that the Eritrean women using the opportunity created for them by the EPLF during the armed struggle for independence have demonstrated miracles, and called for more efforts to further strengthen gender equality.

In a solidarity speech the different national associations presented during the occasion, they articulated that they would stand alongside the NUEW in its efforts to practically ensure gender equality and strengthen women’s equal participation in the national development programs.

During the occasion a number of female students from the Central region who demonstrated outstanding performance in the academic pursuit received awards.