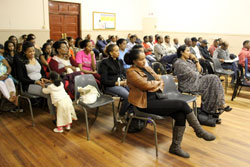 Speaking at the ceremony conducted by the Eritrean community members in South Africa, Mr. Saleh Omar, the Eritrean Ambassador to the country and the Southern Africa’s region, gave briefings concerning the event along with Ms. Almaz Araya, head of the NUEW branch in South Africa.

Likewise, the Eritrean community members in Abu Dhabi, UAE, lauded the role of the NUEW vis-à-vis the endeavors made to ensure gender equity, and asserted that they would step up backing the national development drive. In a remark he made on the occasion, Mr. Al-Amin Nafi’e, Executive of Embassy Affairs in Abu Dhabi, said that external enemy conspiracies would end up in fiasco thanks to the steadfastness and unity of the Eritrean people. Also speaking at the meeting, Ms. Elsa Tela, head of the Union’s branch in Abu Dhabi, stated that Eritrean women would enhance role in the nation-building process on the basis of spirit of persistence against all odds.

The events organized by the Eritrean communities in the US cities of Denver and St. Lewis, as well as nationals residing in Kuwait witnessed high spirit of fervor. A number of activities depicting the Day also featured in the ceremony.