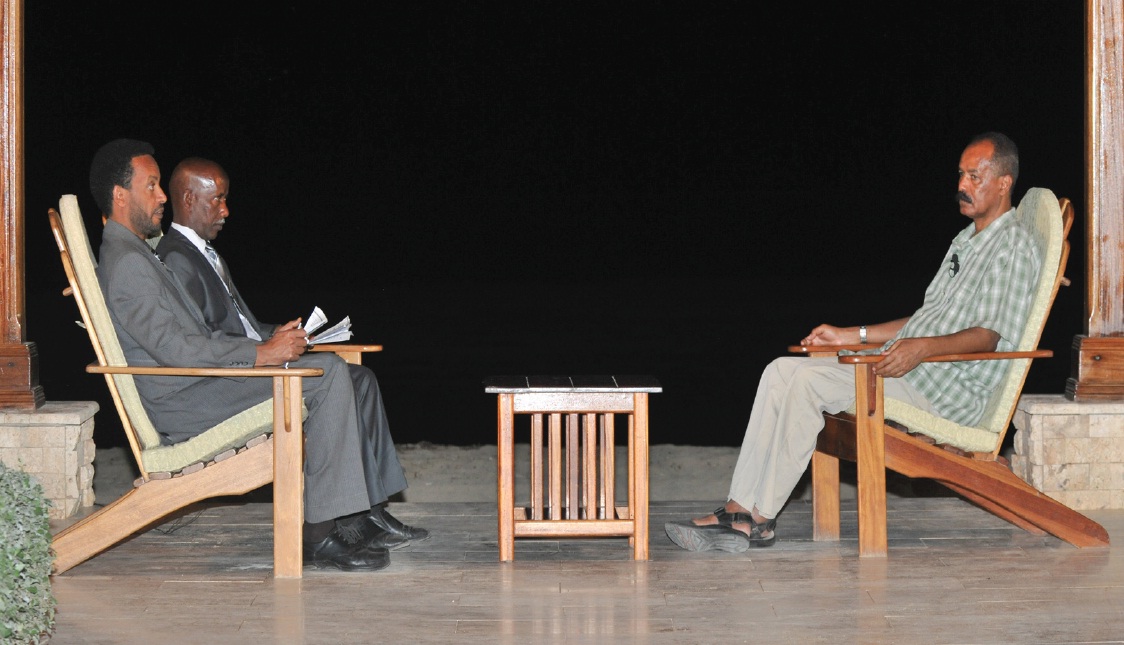 It is to be recalled that H.E. President Isaias Afwerki conducted an extensive interview with the national media outlets on the occasion of the New Year 2014 on the 9th of February 2014  in the port city of Massawa, regarding the overall situation of the country and also the regional state of affairs and future scenarios. Excerpts of the Fourth part follow:

In the health sector, Eritrea has been commended for the success it registered with respect to the Millennium Development Goals (MDGs). Nevertheless, citizens are still going abroad for better medical services. What plans are there to develop medical technology?

We shouldn’t pay too much attention to these MDGs; we should be evaluating the actual situation of health services instead. What is being done is only a continuation of the medical services we were rendering through our barefoot doctors in difficult situations during our struggle. It didn’t progress as desired. The standards for evaluation are not the provision of health services in big cities and limited areas only, but in the remote and less advanced places as well. It’s true we might have met global standards when it comes to malaria and other diseases, but that should not put us at ease. It would be wrong to compare your excellence with others’ mediocrity. You need to have your own standards. How is the health service in those remote areas without access to roads, power or potable water? Those should be the standards…and not the statistical embellishments given to us by others. We should focus on developing our human resources because no facilities, medical technologies and services can function without human resources.

Citizens being referred to foreign hospitals are with extreme cases and limited in number. We should not be concerned for not having the capacity to address such cases or for not possessing the hi-tech medical equipment; we cannot say we will treat every illness or bring all medical equipment. Even if we did bring the facilities, it wouldn’t end there, as there needs to be adequate human resources. So we are developing our human capacity to that end. We might have shown progress in controlling and decreasing the number of diseases but it is not on a 100% scale. If people go abroad for treatment because it’s beyond our capacity here, it shouldn’t be taken as a weakness on our side.

There are restructuring activities that started in 2013 in a bid to ensure efficient organization and management. How will these continue in 2014?

It’s not about changing individuals. Systems need to be upgraded through experience. They need to be revised before the new placements are put in place. It has been years since a new

organizational plan was drafted. Especially that of the regions, the structure and the general skeleton must be finalized in the first half of 2014.

In your last interview, you mentioned that emboldening the Front would be one of the programs for 2013. What has been accomplished so far? And what plans are there regarding this country’s political building?

The Front needs to evaluate its experience and not live by its fame and reputation of yester years. The foundations might still be in place but the Front needs to be reinforced in every new phase. Nothing can be done without a directing and orientating force. If the front is not strong enough all the economic, social, political and cultural programs at home and abroad can’t be effective. So we need to start the organization at the base. You need to boost the awareness and participation of the people at the village, town, sub-region and regional levels and work upward from there. The way the different regions, ministries and associations are organized should also be undergo radical changes. This is easier said than done. Since the Front is a tool of the country’s political development, we can’t say it has no flaws. Of course, there are obvious problems and shortcomings and these need to be resolved so the front can best serve its cause. And this is not indomitable as we have experienced it for over half a century and grown through such a process.

This Front’s economic, political, cultural and social capacity needs should sustainably progress, as it should be a beacon of orientation. What needed to be done in 2013 in this dimension was postponed and will probably be finalized this year. We need to be pragmatic and not just idealists. The philosophy in the end is political education alongside sensitization and organization. The people’s participation should also be based on awareness, because knowledge is the basis for sensitization. And when you add will and popular participation to that, it becomes organization. If there is no organization, no strategy or objective can be achieved. You need to be armed as well, with not only a shotgun but also all kinds of armaments.

Therefore, without making these adjustments, one cannot expect the Front to work effectively in the future. What has and hasn’t been done in 2014 will be seen at the end of the year but those programs suspended in 2013 need to be executed in 2014.

There have been ploys to drain this nation’s human resources and especially the youth. One cannot say this did not do any harm. You have actually talked about it in detail last time. What plans are there to expand education and employment opportunities at home and create domestic satisfaction to foil similar ploys?

I would say we are on a wishing track. It doesn’t mean there are no ploys. How is the global rate of unemployment? If we look at Spain, Greece, Portugal, Italy and most European countries, the rate is quite upsetting. So how can anyone without education or profession go and find a job in those countries? The same goes for the US. This is not our problem only. In Sudan, let alone high school graduates like ours, people with degrees from prestigious universities leaving the country have reached up to 60%, which is an alarming number.

Ours’ however is not that bad. The problem is that the salary you get for a job here is different than that you get abroad for the same job. What made it dangerous in our case are the well-organized ploys. If the nation is stable and the youth here are settled and become productive, it poses a threat to the different forces in this region. The ploy is therefore how to disrupt this. And those who are leaving are not the laypeople but those who have earned their expertise with the resource of the people and government. It would have at least been worth it, if they managed to find a decent work and sustain them¬selves overseas but instead they are made to pay exorbitant prices to leave the country and then left scattered in different countries. Those who have learned and acquired a profession have done so with the resource of the people and they should be compensating their families, people and nation. It’s a big loss for the country if you are leaving after it paid for your education for 12 years and more. They should be building their nation, if they are to savor it in the future.

Those leaving have not even secured a future for themselves. There is nothing worse than the life of those living in Israeli camps. Nor less unfortunate are those living in different European countries. The few Eritreans and non-Eritreans claiming to have glittering lives abroad are individuals taking part in the disruption ploys. But now the time is up. All attempts have worn out. There is nothing to be found there so it’s better to say “Come back home!” Otherwise, nothing is affected here by their desertion.

Stepping to political and diplomatic is¬sues, Mr. President, is there any truth to recent media reports alleging efforts to reconcile Eritrea and Ethiopia? And are there any developments on the Eritrean-Ethiopian issue?

There is no such thing. You cannot say that the TPLF will refrain from such PR gimmicks until its very end. They have been practically knocking at every door around the world claiming to “have accepted the boundary commission ruling” and that they seek “dialogue” and “mediation.” Such maneuvers might have worked long ago but now we have simply grown tired.

Sometimes I feel sorry for them. Why are they wasting their time? Whom are they trying to fool? They are only trying to look as victims and make us the bad ones. Therefore, it’s better if we didn’t waste our time and avoid such trumpery. Any Eritrean at home or abroad should refrain from entertaining similar thoughts.

Everything happens for a good reason