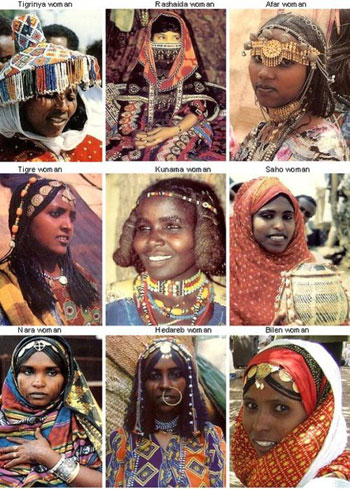 Afar: Primarily pastoralists who inhabit areas of southern Red Sea. They are Muslims and organized in strong clans.

Bilen: Traditionally farmers, populate Keren and its immediate surrounding. Their social structure is organized by kinship groups. There are equal numbers of Christians and Muslims.

Hidarb: Cushtic Beja (T’bdawie) semi nomadic pastoralists specializing in raising camels and cattle. They are found in the western lowlands.

Kunama: They are mainly found in villages between the Gash River and in Barentu. They are Nilotic and renowned dancers having developed more than 25 different dancing forms. They are mainly Christians and Muslims with some traditional believers.

Nara: Nilotic, they live in the area east of the Gash River. They have mixed culture similar to that of the Kunama’s. They are Muslim.

Rashaida: Most recent tribe to come to Eritrea from the Arabian Peninsula. They are predominantly nomadic people who live along the Northern Red Sea coast. They are Muslim.

Saho: They occupy the territory on the south-eastern slopes of the highlands as far as the coastal plains south of Massawa. They are small scale farmers who emphasize in bee-keeping. They are Muslims and Christians.

Tigre: They cover a large area of the northern, north-eastern and western Eritrea. Their oral literature consists of folklores, legendary war cries, riddles, etc. They are Muslims and Christians.

Tigrina: Populate the highlands of Eritrea and are mostly farmers. They are mostly Coptic Christians, Catholics and Protestants. A small group of Muslims also form part of the ethnic group.