North eastern Sahel Front: From birth to demise Part I 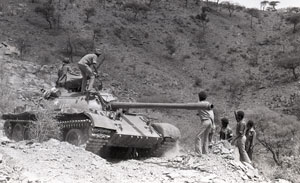 Beginning from the mid-1970s, the Eritrean armed struggle has started to acquire both military skills and hardware. On the contrary the Ethiopian army stationed in Eritrea in particular was extremely weakened by the withdrawal of the massive financial and military support it used to receive from its western patron the U.S.  After the turmoil that toppled the Haileslasie regime and the unrelenting attacks of the Eritrean armed struggle in particular the Eritrean People’s Liberation Army (EPLA) it was exposed.

Consequently in between January 1977 and January 1978 in just one year, the Eritrean People’s Liberation Front (EPLF) following its military strategy of liberating the people and the land step by step, brought the largest parts of Eritrea under its control with the exception of Asmara, Assab, AdiKeih Barentu, Asmara and parts of Massawa. The Ethiopian army in these towns was awaiting its fate, encircled.

During the Haileslasie regime, the western countries; the United States and to some extent Israel took the task of building and arming the Ethiopian army. After the removal of the monarch by the allegedly Marxist military clique however the winds started to blow from east. Soviet Russia was on the constant watch out for strategic spots around the world, and swiftly moved to bring in to its orbit the disillusioned Ethiopian military gang that were in power in one of the most strategic parts of the world. After its first attempt to approach for continued military support from the U.S was hopeless the Derg, was also eager to establish contacts with USSR. As a result it started secret negotiations with Soviet Union starting in 1976. This ended in a military pact between the two new friends, signed in 1977.

The result was the first largest military intervention in the African landmass since World War II and the prolongation of the suffering of the Eritrean and Ethiopian people for another decade and more. In between 1977 and February 1978, without adding the arms that followed in later years, the Soviet Union shipped arms worth a billion dollar to Ethiopia. In addition hundreds of military officers from Russia, Cuba, East Germany and south Yemen were brought in to train and advice the Ethiopian army. At that time 17,000 Cuban troops also came in to aid the Ethiopian

army in the Somali front.

On the northern and Eritrean front the Derg never took the Tigrean People’s Liberation Front (TPLF) and the Eritrean Liberation Front (ELF) seriously and for a good reason. The ELF was mired at that time in a vicious and reckless power struggle that finally destroyed it while the TPLF, barely a couple of year old was an infant military and political force. This left the EPLF as the only force and target with little more than 14,000 thousand manpower equipped with light and medium arms, to face the massively backed Ethiopian army.

With no one to count on from outside for help to the EPLF, the military balance was far from symmetrical. Aware of this harsh reality, the leaders of the EPLF knew that engaging the Ethiopian and Soviet onslaught was both a military nonsense and political suicide. To ensure the continuity of the Eritrean People’s armed struggle, the EPLF decided for the famous Strategic Withdrawal of 1978.

THE BEGINNING OF THE COUNTER-OFFENSIVE

By the time the Derg was preparing for its counter-offensive, with the exception of the aforementioned towns almost 80% of the Eritrean territory was under the control of the Eritrean People’s Liberation Front and the Eritrean Liberation Front. The Dergue planned to attack the EPLA from five directions. To execute this plan it mobilized six army corps comprising 38 infantry brigades, 6 mechanized brigades and 10 artillery battalions. In addition to this land force, a navy equipped with modern combat and transport ships and an air force comprising five squadron jet fighters were also in line to provide cover and support. The military strategy ready to be executed by this machinery was drafted by experienced Soviet generals.

In executing this strategy the Ethiopian army began its counter-offensive by mid June 1978 in all five directions simultaneously. Although the Derg was able to bring back much of the liberated parts of Eritrea under its control again, it didn’t do so easily as it was forced to pay heavily. The Derg began its offensive with the intention of wiping out the Eritrean liberation fronts within the time span of 2-3 months. However by the first two months it was too late for its mission as it spent them locked in a relentless fighting with the Eritrean fronts. Soviet and Ethiopian generals were quick in realizing that the war was heading in to becoming a protracted one. Hence they changed gear and brought in additional Soviet advisors and embarked on devising a new war strategy for a second offensive.

As this was happening, the EPLA was positioned in four fortified fronts. The first one being the eastern front near and around Asmara and Massawa, the second one covered the northern outskirts of Asmara stretching from Drfo up to Adi Yaqob, while the third one was in Barka around Engerne. On November 1978, enemy troops started the offensive on these three fronts. The

Dergue, taking advantage of its arms and manpower superiority was able to break the EPLA lines by stretching the trenches making it impossible for the EPLA to cover it, but not without a price. Consequently the EPLA was forced to withdraw. The EPLA however draw the enemy in to several ambushes including in Elabered and Mamide were it has lost thousands of troops, hundreds of armoured vehicles and artilleries.

The enemy’s plan to capture the main base of the EPLF by controlling Afabet and Nakfa and fighting its way through Marsa Teklay was discouraged by its heavy loss and defeat in Elabered, Ma’emide and Azhara. The result was from 1979 onwards the Derg focused on preparing for its third offensive.

THE ESTABLISHMENT OF THE NORTHEASTERN SAHEL FRONT

After the Derg’s 2nd offensive was pacified, the EPLA built two defence lines. On the eastern lowlands it fortified its positions in Ma’emide and Azhara and on the keren –Afabet line it dug itself in Genfolom. From this last position EPLA units were able to block the 3rd enemy offensive that began on late January 1979, any further.  However the enemy manoeuvred away its troops and mechanized units through landing crafts in to Marsa Teklay and Mahmimet respectively.

The EPLF never ruled out the possibility that the enemy could come through the sea. Hence it has always stationed two battalions around Marsa Teklay and Mahmimet. And after the movement of the enemy toward North eastern Sahel, it was forced to withdraw its units in from Ma’emide. As the EPLA units around Mahmimet and Marsa Teklay were not strong, the base of the EPLF was endangered when enemy troops easily moved toward it. In order to move the base away it was mandatory to chase away the Ethiopian troops first. On the first two weeks of February 1979, the EPLA troops opened a counteroffensive and chased away the Derg in to the plains.

After moving its base to Geregr Asmara, QebrWu’et, Halibet, and Arag, the EPLF established the North-eastern Sahel front in a front line that stretched around 40km in its first existence. Following the different battles the front was connected with the Nakfa front and the Sudanese border making a front line that measured around 667km.

Parallel to this, the EPLA was also forced to withdraw to Hiday River from Afabet. After giving the enemy a heavy blow there it hold its permanent positions in and around mountain Denden and the peaks attached to it. The Derg resorted in blanket shelling of Nakfa, the only town that would never come under its control ever after. In 13 February 1979, EPLA units launched a counter-offensive to chase away the enemy so that they can strengthen their positions peacefully.

During the 8 months of the protracted war that lasted throughout the strategic withdrawal the EPLA units were fighting according to the demands of battle not military science. With the establishment of fronts however they were organized accordingly. Hence they were stationed in the north-eastern Sahel Front and Nakfa Front proportionally. The 51st, 58th, 70th and 8th brigade which was later renamed 77th brigade were stationed in the Nakfa front while the 23rd, 4th, and 31st were placed in the North-eastern Sahel front. The 44th brigade was also placed in this front but after the 5th enemy offensive. The 76th mechanized brigade also placed two battalions in the North-eastern Sahel Front and one in the Nakfa front.

The Derg also equipped its North-Eastern Sahel Front with the 505 arms corps, comprising eight brigades, two mechanized brigades aided by two battalions equipped with over 80 122mm 85mm and 76mm artillery, two tank battalions with over 60 tanks and one battalion equipped with 12 BM21 artillery.