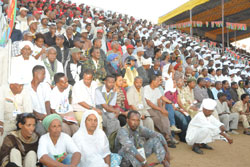 The pilgrims of the 30th anniversary of the demise of Wukaw Iz expressed appreciation for the preparations of the celebrations and the efforts exerted to that end.

Mahimet, 23 March 2014- The pilgrims of the 30th anniversary of the demise of Wukaw Iz expressed appreciation for the preparations of the celebrations and the efforts exerted to that end.

They said that the artistic displays especially the photo exhibition staged by the Ministry of Information depicting the daily activities of the EPLF fighters and the displays staged by the Ministries of Health and Education properly represent the event, and that attests to the meticulously executed preparations.

Veteran fighters Sofia Saleh and Mehreteab Kiflemariam expressed satisfaction for coming back after 30 years to the place they have been stationed during the armed struggle, and that with the aver all preparations of the celebrations they have been able to renew their memory of the past. They also called for sustainable efforts so that such history would be transferred to posterity.

Mr. Samuel Girmai reiterated that he has been able to learn more about the heroic feat of the liberation fighter through the different programs that have been staged, and called for proper documentation of events so that they would be transferred to generations.

Likewise, Mr. Desale Okbaselasie, who designed the monument depicting the heroic feat of the Eritrean people in general and the EPLF freedom fighters in particular expressed satisfaction for contributing his part in the documentation of the heavy price paid for the liberation of Eritrea.

Veteran fighter Zewdi Mengesha, on her part expressed appreciation to observe Mahmimet which has been military training center of the EPLF during the struggle for independence growing into semi-urban center, and called on the inhabitants to exert more efforts alongside their Government for the success of development programs.