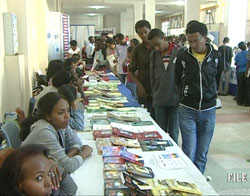 The organizing committee of the National Book Fair indicated that the event would be conducted from 28th of March to April 13 in different cities of the country.

Asmara, 24 March 2014 – The organizing committee of the National Book Fair indicated that the event would be conducted from 28th of March to April 13 in different cities of the country.

Accordingly, the exhibition would remain open in Asmara from 28th of this month to 6 April, while it is due to take place from 11 to 13 April in the rest cities including the port city of Assab.

Mr. Issac Yosef, coordinator of the event, pointed out that the fair is aimed at popularizing the culture of reading across the society, and thus the hosting of an open forum, exhibitions and related student activities as well as sales of books at fair price. He also explained that the number of participant institutions has increased from 15 to 127 from the year 2002, while that of visitors grew from 10,000 to 80,000.

The exhibition would be conducted in Asmara in collaboration with publishers, and in the rest cities in Association with the NUEYS. Moreover, book prices are expected to drop further as individual sellers have taken the initiative of setting a 10% discount in addition to the customary 20% government subsidy thereof.

The organizing committee called on nationals to become beneficiaries of the book exhibition and bring about constructive ideas and views to this end, and that the role of the Education Ministry’s branch in the Central region was significant in organizing the event.

The National Book Fairs is taking place for the 13th and 4th time in Asmara and other cities respectively.