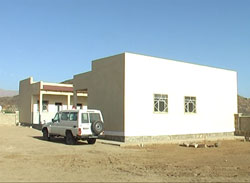 The health center in Qarura that has been built with over 8 million Nakfa has commenced providing service.

Qarura, 25 March 2014- The health center in Qarura that has been built with over 8 million Nakfa has commenced providing service.

At the launching ceremony held on 23 March, in which Ms. Tsegereda Woldegergis, Administrator of Northern Red Sea region and Government and PFDJ officials took part, Ms. Amna Nur-Husein, Health Minister, indicated that the establishment of the health center in Qarura has been part of the efforts on the part of the Government to ensure social justice in the country.

She further explained that the inhabitants of Qarura and especially pregnant women and children had to travel long in order to get treatment, and that with the establishment of the health center their problem has been alleviated.

From the inhabitants, Mr. Abdella Mohammed-Seid and Ms. Sa’adia Ibrahim said that they have been required to travel long in order to get health services, and that with the establishment of the health center at their back yard their problem has been alleviated.

Mr. Mohammed Osman, assistant nurse at the center, expressed that the health center would be a big relief to the inhabitants of Qarur and its environs, and called for judicious use of the center and increased participation in controlling and follow-up on the prevalence of communicable diseases.

Likewise, Ms. Amna Nur-Husein visited the health center in Mahimet which has been renovated with more than 7 million Nakfa.