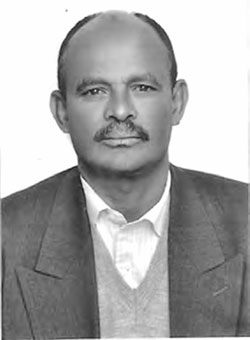 The veteran fighter Tekeste Teklemariam (Damba) was born in 1956 in Damba Seharti, Dekemhare sub-zone. He joined the armed struggle for independence in 1975. The following interview has been conducted in connection with the 30th anniversary of the demise of Wukaw Iz.

-How and when did you join the armed struggle?

It was in 1975, it was the time in which there was strong political movement and strong agitprop among the youth with regards the political situation in the country. I was in Addis Abeba and I travelled all the way to Tigray and from there to Tsorena, Eritrea.

-What was your knowledge about the Eritrean revolution before you joined the armed struggle?

I was recruited as a clandestine member of the EPLF. And with that I developed my political awareness and my urge to join the armed struggle grew with that.

-How old were you?

-Do you remember the day you joined the armed struggle?

I went with martyr Simon Kifle to the EPLF unit that has been station at Seharti. I told my parents that I was going to visit my grandmother who was living in Ala. The believed me. But that was an excuse for me to go and join the armed struggle.

-How did you find the military training and life in the field?

The military training has been good. And even though life in the field has been challenging, but since we joined with vision we had to endure it.

-And there have been different campaigns along side the military training. How was it?

At that time there were many youth joining the armed struggle. With the growing of the organization with man power there has been the need of putting in place infrastructural facilities. Roads had to be built, and we were busy with that.

-Where were you assigned after completing of military training?

I was assigned to Battalion 3 platoon 33. It was stationed at the Southern region, and was responsible for the areas stretching from Ala to Tsorena.  Our job has been to conduct ambush on the enemy coming directly from Tigray to Eritrea and providing political education the people. After 2 years I was transferred to Brigade 4 Battalion 3 Force 3 as a combatant. In 1978 I became assistant unit leader. And after I completed political education in 1979 I was assigned as Platoon leader.

-How did you find the North-Eastern Sahel Front?

We had been stationed in the highlands for a long period of time. We went to the North-Eastern Sahel Front we were confronted with very hot weather. We had lack of water to drink. We had to travel a long distance to fetch water.

-What could you tell us about the operation for the demise of Wuqaw Iz?

The enemy had been nicknaming its forces stationed in different places in the country, Mentir, Nadew, Wuqaw, etc. That was mainly done to raise the moral of its soldiers. Wuqaw bing in

Amharic, literally means “hit hart”. Wuqaw had been stationed at the North-Eastern Sahel Front and had been considered one of the strong army of the enemy equipped to the teeth with sophisticated weaponry.

-You physically participated at the operation.  How was it conducted?

The operation started on 22 March 1964 exactly at 1:00 o‘clock in the afternoon. The battalion that I was a member was assigned to confront the enemy forces fleeing towards Marsa-Teklai. There we met unexpectedly the enemy 4th para-commando. That was the turning point of operation. We had to suffer some casualties and treat back for a while.

Exactly after a month we started  an offensive at 2:00 o’clock in the afternoon. The weather helped us a lot. There was heavy fog that you could hardly see each other. That was a very disadvantage especially for the enemy forces. And they could not resist our offensive, the enemy’s lose had been incredible. Many were killed, others captured and those who fled they had no way to go except drowning in the sea. The commander of the Ethiopian forces General Husein escaped and one Maj. General, Girma Tesema, captured.

-What was the significance of the Wuqaw offensive?

Every offensive had its significance. The demise of Wuqaw Iz had been important for the EPLF. First the area had strategic importance for it had been the stepping stone for the demise of Nadew Iz that has been the enemy’s strong hold for ten years. Secondly with the demise of the enemy forces the EPLF reinforced its fire power, for our motto had been “hit the enemy with its weaponry”.

-What message do you want to convey to the youth in connection with the 30th anniversary of the demise of Wuqaw Iz?

The history of the Eritrean revolution is the history of the youth of this country. I want to convey my message to the youth that they have to know their history, they history of the heroic feat of their fathers and mothers for the liberation of Eritrea. The youth, hence, should always vigilant, hard working and develop Eritrea in which its people could live in prosperity and peace.

Stamps and their significance in history