Berikh sub-zone: Call made for stepped-up efforts on the part of all government bodies as regards nurturing dynamic youths 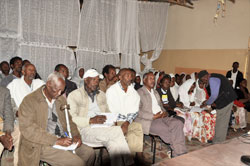 The Administration of Berikh sub-zone called for stepped-up efforts on the part of all government bodies as regards nurturing dynamic youths.

Asmara, 31 March 2014 – The Administration of Berikh sub-zone called for stepped-up efforts on the part of all government bodies as regards nurturing dynamic youths. It made the call at a seminar with Junior and Secondary school students, members of parents’ committee as well as teachers, during which Mr. Kalab Keleta, head of the branch office, indicated that enhanced endeavors are being made towards furthering educational outreach.

He further explained that the national development can be ensured through nurturing virtuous youths who strictly adhere to sense of discipline and national values, and that a joint venture is a prerequisite to this end.

Speaking at the meeting, Sgt. Yohanes Tadese, head of crime investigation in the police station in Tsaeda-Kristian, and Mr. Melake Tewolde, head of the NUEYS branch in the sub-zone, pointed out the vitality of raised student awareness regarding crime vis-à-vis inspiring overall charisma among the young generation.

One of the students, Aster Abraham expressed satisfaction with the seminar.

In closing remarks, Ms. Leul Asrat, Administrator of the sub-zone, called for the organizing of similar seminars in the future.