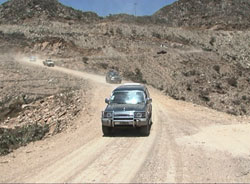 Speaking at the inauguration ceremony, Mr. Mohammed-Sied Mohammed, Administrator of the area, indicated that the inhabitants made financial and labor input in the process, and that the locality used to witness transport problem in connection with lack of such dirt road.

Mr. Amanuel Mihretab, in charge of the project’s follow-up, explained that the construction of the 7 meters wide road which crosses the Eastern Escarpment and is worth 20 million Nakfa has significant impact as regards promoting socio-economic, administrative and tourism activities. He also expressed appreciation for the active participation demonstrated on the part of the community in the process.

Among the community members, Mr. Ibrahim Hassan and Ms. Jim’a Ibrahim said that the construction of the road would favor health outreach, and called for the launching of quick transportation route to the village.

Speaking on the occasion, Mr. Kahsai Gebrehiwet, Administrator of the Central region, equally lauded the initiative taken by the inhabitants of Gul’e as regards backing the undertaking, and called on them to sustain follow-up of the road for viability of transport.