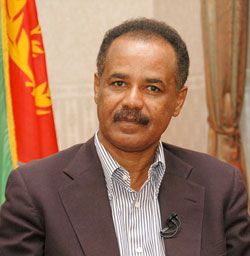 In the course of the meeting conducted thereof at the State House, Mr. Carmara Amedi, Mauritanian Minister of Environment, delivered the message to President Isaias, and gave briefings concerning the Great Green Wall Initiative.

President Isaias Afwerki asserted Eritrea’s readiness to exert stepped-up efforts for the realization of the goals of the Great Green Wall Initiative, and stressed the vitality of the enhanced role other countries ought to demonstrate to this end.

Great Green Wall Initiative pertains to an alliance launched in a bid to combat desertification and comprises 13-memebr states including Eritrea.