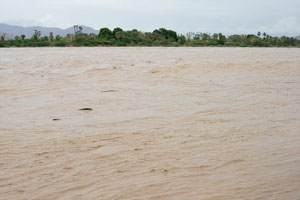 The Gash and Setit Rivers

The zone is bounded by the Gash River in the north and the Setit (Tekeze) River in the south. The area is situated in Gash Barka region, south western Eritrea at some 300km west of Asmara along the road that links Asmara and Tesenei. It falls within the semi-arid lowlands agro-ecological zone, characterized by a warm and semi-arid climate with temperatures ranging from 20 to 41 degree centigrade and  an elevation of 1000-1500m. The mean annual rainfall is 200-400mm and very erratic.

The area harbors a good number of wild life species including African Elephant (Laxodonta Africana) Greater Kudu, Red Fronted Gazelle, Dorcas Gazelle, Warthog, Water Buck and others. Bird life in the area is particularly rich. The African Elephant in Eritrea is the most northern range on the continent; their population is steadily climbing up. The Setit River flows throughout the year and it is crucial for the existence of elephants in this most northern limit.

Buri Peninsula is located in the Northern Red Sea region, in the coastal area approximately 140 kilometers southeast of the port city of Massawa. The area comprises a dramatic landscape of

semi desert and fair cover of vegetation with basaltic lava flowing from recent volcanic activity and has a rugged and varied topography including scenic bays and the inlet of the sea. The area used to accommodate a fair range of wildlife species including globally endangered species of African Wild Ass, and two different species of gazelles, ostriches, foxes, etc.

In many areas close to the sea, halophytic shrubs such as Suaeda Monoica dominate the vegetation, and along watercourses, there may be small areas of Doum Palm (Hyphaene Thebaica). In some areas Commiphora is the dominant woody species. Along the mainland, the islands and shorelines are numerous small pockets of mangrove forest dominated by Avicennia Marina.

African Wild Asses (Equus Africanus Somaliensis) live and breed far south of the Buri peninsula and extend its home range up to Southern Red Sea region particularly Areta sub-zone (around Tio). This population of Wild Ass may be the only viable population of the highly endangered species in Africa. Other species like Dorcas gazelle (Gazelle Dorcas) and Soemmerringi gazelle (Gazella Soemmerringi) also use this area on a seasonal basis congregating in significant numbers on the entire of the peninsula and Wengebo plains during the wet season. Ostriches (Strthio Camelus) are still numerous in the Buri Peninsula, and are often found close to settlements since Afar pastoralists have cultural ethics of conservation. There are also a number of important seabirds.

The Green Belt (Semienawi  Bahri) is located  24 Km to the northeast of Asmara and covers an extensive area of approximately 100,000 hectares from the top of the plateau, running down to the east through several ranges of hills to the beginning of the eastern lowlands. The area is administered under Ginda sub-zone, Northern Red Sea region. The altitude varies from 500m to 2500m with a north south range of 20km. The natural vegetation is dense and open forests dominated by Olea Africana, Juniperus Procera. The steeper hillsides are covered with woody vegetation. Canopy cover ranges from around 20 percent on some hillsides to 80 percent in gullies and valley bottoms. At the highest point of the forested area (2300m) vegetation is dominated by shrubby Juniperus Procera, seldom exceeding 8 meters in height (despite its potential for reaching 40 meters). The species are slowly regenerating and young trees are relatively plentiful. A large range of species are found at lower elevations. This narrow belt zone is evergreen almost all year round mainly due to its high and well distributed rain and the frequent occurrence of mist, gave chance for diversified wildlife species. They include: Greater Kudu, Vervet Monkey, and the Leopard just to name a few are reported as coming back. Certainly, restoration of the forestry cover in a richer floristic composition contributed for a positive impact on the diversity of wildlife species.

Semienawi  Bahri  has various  and highly valuable assets. The proximity of the forest areas to Asmara, their fascinating landscape and their potential of a large biological diversity are values that can be explored and used for eco-tourism, education and scientific researches.

Watch out for the pranks on April’s fool!