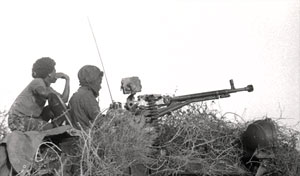 After enemy’s second offensive the EPLF (Eritrean People LiberationFront), was on the waiting to conduct strong resistance against the third offensive by constructing trenches in the eastern plains at Mamide and Azhara, and also at Genfelom in Keren-Afabet route. As expected, the third offensive was launched through these two directions. Bearing in mind that the defensive place of Genfelom Front has been stretched too much, some units of the EPLF withdrew from that area to Gogay just before the launch of the offensive and took positions in an area that starched from mount Agombosa to the hilly areas of Agamet. This way the enemy’s infiltration attempt of the 1979 was blocked. Nevertheless, on January 25 of the same year the enemy had attempted to divert the EPLF’s attention through mobilizing its strongest army division 505 from Massawa to Marsa Teklay and its mechanized units to Mahmimet- North Eastern Sahel in a way that seems to launch an attack on Mamide Front.

Since the EPLF’s leadership had already expected the possibility of enemy’s coming through the Red Sea, it assigned two battalions around Mahmimet and Marsa Teklay areas so as to prepare themselves for any eventuality.

However, as the enemy forces advanced towards North-Eastern Sahel, a large portion of EPLF units withdrew from Mamide to Goreyto and Wedgan leaving two battalions behind in Aget. Consequently, haven areas around Debat, Ziero,Seberkete, Blekat, Fah, Mahmimet that harbored people as well as essential goods and equipment of the EPLF had fallen under a threat of Enemy’s attack. The EPLF had therefore to take a swift action to transport people and goods before it is too late. Taking the advantage of a very limited number of EPLF combatants who were in Mahmimet and Marsa Teklay, the enemy marched to Goreyto and Wedgan. So, the EPLF had to launch an attack to prevent the areas from being attacked by the enemy. Thus, in the first week of February 1979 the EPLF forces pushed the enemy to the plains and paved a way for save transportation of people and goods to Geregir-Asmara, Kebreweat, Halibet, and Agrag. Following the successful transportation of people and goods to safer sites, the EPLF took positions which stretched for about 40 kilometers from Wedganto Taba Selam, and through Desnett, Hatseynet and Debre-Emen and thereby to Tigih and that ends in Alalieb. Hence, North-Eastern Sahel Front was formed in these areas.

Documents of the EPLF indicate that with the ongoing war and successive offensives of the enemy the Noth-Eastern Sahel Front was by far stretched and interconnected with trenches of Nakfa to cover a total area of 667 kilometers.

In connection to the developments in the North-Estern Sahel Front, the EPLF withdrew from the Keren-Afabet route to Qokay and leaving Afabet city behind moved to Hiday River and fortified a

position in the mountains of Haras Harmaz. After making the enemy face heavy loses, the EPLF finally withdrew to Mount Denden situated at the very gates of Nakfa and took its final defense line along the chain of terrains thereof. The enemy forces started to disturb Nakfa-the only un-captured city-with areal bombardments and heavy artillery.

But the EPLF was not at ease to strengthen the last stronghold chosen to be in Nakfa terrains due to ceaseless bombardments.Thus, the EPLF found it necessary to launch a strong counter attack on 13 February 1979 against the enemy forces who were marching in a hurry desperate to recapture Nakfa Through this attack the EPLF out routed the enemy forces and ultimately pushed them down to Hiday River. As the enemy suffered huge losses and the EPLF found the opportunity to establish its defense fortification so that enemy would never attempt to recapture Nakfa.

The EPLF was constantly confronting the enemy in places and times of convenience in the war engagements that continued for about nine years while simultaneously solidifying its position. It has been also engaged in conducting surprise attacks against the enemy in different places in a bid to weaken it so that it would never be strong to conduct huge offensives. While establishing a permanent position at the Nakfa front it also moved some brigades to the North-Eastern Sahel Front. The aim of establishing this front had been to weaken the enemy forces through ambushes and eventually route them out from the strategic areas of the coastline and deny supply lines.

Likewise the enemy forces were making rearrangements in their tactics and were constantly moving here and there in order to gain aground of conducting an offense. The 505 military division (Gbri-hayl) of the enemy had been station at the North-Eastern Sahel Front. This army unit of the enemy had two infantry and two mechanized brigades that were heavily armed.There were also other backup forces along with this hugely armed unit.

Even though the 505 military division which founded the North-Eastern Sahel Front on the enemy’s part was heavily weakened and all its members were frustrated due to subsequent loses in three offensives, the Derg regime decided to continue the war as it set out to destroy Eritrean revolution once and forever no matter what it takes through engaging the EPLF forces in ceaseless battles. Thus, after a one and half month preparation and reorganization, the enemy launched the fourth offensive in April 1979.

The war tactic in which the enemy employed in the 4th offensive had been to make use of all available weaponry and deploy a number of soldiers as much as possible so as to penetrate the EPLF’s stronghold. The mountainous areas and terrains were not, however, favorable for the enemy and therefore the enemy had not been in the position to launch an attack on the two wings of the front. All attempts of penetration faced EPLF’s strong resistance. Through such a heavy battle the EPLF totally discarded the enemy from Debreemen and Ela-Tsada. Another counter

attack by the EPLF cleared the enemy from Korora-Shigelet route. The enemy experienced heavy lose in the 4th offensive and had been slammed hard unable to continue its advance. Likewise the enemy launched a heavy attack that was accompanied by ceaseless areal bombardments to penetrate EPLF’s frontline particularly at the right wing of Nakfa Front.

Before launching the 5th offensive the enemy was in a three months of preparation and recovery period. As most of its army had been irrecoverably beaten from the first through the 4th offensives, it mobilized an additional of 20,000 infantry and other supporting units and this also ended with the defeat of the enemy.

The 5th offensive begun on 13 July 1979 in Medne-Hjak which had been newly established front and it continued until 26th of July. None of the attacks launched in the two frontlines had been in favor of the enemy. Attempts made to win through the third front had been all in vain. As the EPLF expected the enemy would come in other directions some units were deployed to conduct ambushes in a bid to block enemy forces. Hence, the EPLF’s brigade 44 took a position in the mountainous terrains of Agra’e and has been engaged in fierce battle for four days. Meanwhile, another unit set out for a pre-planned attack on enemy’s command line. In this surprise attack, commander of the front Colonel Kassa Ghebremariam and other army commanders were killed and thus the enemy was in commotion and with no leadership.
Parallel to the attack carried out on the command post, a counter attack had been also taken in the main frontline and the enemy was scattered everywhere. Like its predecessors the 5th offensive which continued for 11 days was also concluded with EPLF’s victory burdening the enemy with causality of nearly13,000 of its troops.

Statement by H.E. Mr. Osman Saleh Minister of Foreign Affairs of the State of Eritrea at the 4th EU-Africa Summit, 2-3 April 2014, Brussels