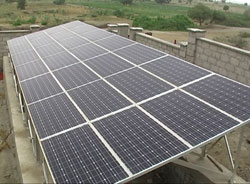 Potable water supply facilities have been put in place in Robrobia and Fatuma-Are areas, Foro sub-zone.

Among the inhabitants, Mr. Mussa Osman and Mr. Adem indicated that there used to be a visible shortage of potable water supply in the locality, and that the community members travelled a long distance to fetch water. They further expressed satisfaction with the new facilities.

Mr. Mohammed-Omer Aman, Administrator of the Robrobia area, explained that the new potable water supply facilities comprise solar panel and two water distributor stations, and commended with the initiative taken by the government in this regard.

In the same vein, Mr. Omer Ibrahim, Managing director of the Administrative area of Ruba-Hadas, stated that the water demand in Fatma-A’re and Wi’a villages could be met through the putting in place of one water reservoir and two distribution stations. They also called on the inhabitants to practice prudent utilization of the facilities.