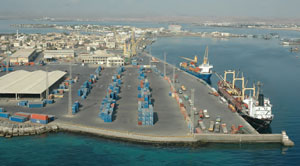 Linking different areas of Eritrea with road networks has been among the success stories which the country is to be proud of. What has been achieved in marine transportation is also not to be viewed lightly. However, unlike to the tremendous progress in land transportation there have been limitations in marine transport as the fairly good infrastructure does not yet correspond to Eritrea’s maritime endowment.

What Eritrea is endowed with and what has been put in place need to go side by side. That is why proper fellow ups of rehabilitation and expansion of ports along purchase of cargo ships and cranes of different types as well as expansion of container terminals have been among the routine activities that continued to be carried out. Owing to the unremitting efforts Eritrea would have not only a competitive but also a first grade maritime transportation system.

Rehabilitation and modernization of ports that have been carried out in different phases has enabled Massawa Port to host mother ships at ease. Reports indicate that more than Nakfa 1.2 billion has been dispensed in the first phase of ports rehabilitation program. Among the projects implemented in the first phase include deepening Massawa harbors number 5 and 6 from 8.5 meters to 12 meters in depth, setting up container terminals, expansion of bridges in the inlets of Sgalet-Ketan and Dahlak island areas, building a maritime transport office in Massawa, renovation of Assab Port and Hirgigo petroleum depot and construction of jetty in Ghergsum, purchase of modern tugboat and 3 ships to shore tower cranes that are capable of lifting 75 tones, introduction of Global maritime distress and safety system, purchase of three commercial ships among others.

The first phase of rehabilitation and modernization of ports has made due contribution in making a difference in the overall capability of maritime services. Hence, Massawa port has started to host shipload of 1000 containers as opposed to a former shipload of 300, it started to unload 2500 tons of goods compared to an earlier unload capability of around 1500 tons. It has also by

Since the rehabilitation and modernization of ports has been planned to be carried out phase by phase, construction of a modern petroleum depot at the cost of Nakfa 400 million is a milestone achievement in the second phase.

The third phase which is mainly associated with Eritrea’s free zone includes putting in place different infrastructural works mainly construction of hungers for small scale industrial plants.  Integration of ports and free zone authority, skill upgrade program to all maritime employees, upgrading the standards of Massawa College of Marine Sciences, drafting a revised maritime policy among others have been a step forward development towards reinforcing the country’s maritime services.

The more than 1200 km pristine coastal areas of Eritrea coupled with the initiative that has been taken at governmental and individual level to make them economic and recreational destination makes the Eritrean Red Sea among the rare places that are to be visited by enthusiasts from the overseas.

The making of the country’s two ports and other areas in their vicinity part of the free zone is indicative of the promising prospect which every Eritrean is expecting to enjoy. Since there are different bays that could be expanded to ports there would be indeed a far advanced maritime service all over the coastal areas the gird Eritrea almost from head to toe.

“My book ‘As I Wish: As She Wish’ is product of my life history”