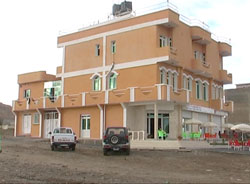 A new hotel worth 15 million Nakfa has been inaugurated in Debarwa town.

Debarwa, 8 April 2014 – A new hotel worth 15 million Nakfa has been inaugurated in Debarwa town.

The hotel owned by Mr. Petros Gebresilassie, resident of Saudi Arabia, comprises 10 well-furnished rooms, a restaurant serving both foreign and traditional cuisines, cafeteria, hall and others. It has also created job opportunities for 20 nationals with 10 more

potential posts in the future, according to Mr. Tesfom Gebreyesus, hotel manager.

Among the employees, Ms. Welesh Abraham and Mr. Solomon Kifle expressed appreciation for Mr. Petros’ initiative of investing in his Homeland.

The Tourism Ministry’s branch in Debarwa sub-zone pointed out that the business establishment is due to inspire the race towards better hotel standard in the town.