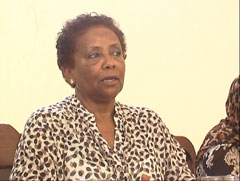 The Minister of Justice, Ms. Fawzia Hashim, called on community magistrates to step up input as regards promoting social stability through exercising the authority vested on them.

Keren, 11 April 2014 – The Minister of Justice, Ms. Fawzia Hashim, called on community magistrates to step up input as regards promoting social stability through exercising the authority vested on them. She made the call at a meeting with staff members of magisterial courts in Anseba region, during which it was stated that they have been making remarkable contribution regarding peaceful settlement of legal cases.

She went on to indicate that endeavors are being exerted to raise the scope of authority of community magistrates vis-à-vis altering their organizational structure, while sense of accountability in judicial procedures remains a vital prerequisite.

Accordingly, the changes to be introduced in connection with the structure and mandates of magisterial courts would be implemented

nationwide on the basis of a program which is due to give rise to mutual understanding with the public. In this connection, the Ministry would work on priority basis as of next year in a bid to put an end to illicit land sale and unwarranted exploitations in rental of house.

Meanwhile, the necessary structural preparation has been finalized to follow-up judicial procedures at regional level, and the role of community magistrates was described significant pertaining to bequeathing cultural values.

The Ministry’s Training Center in Mekerka has currently admitted a total of 100 students, while 200 graduates are on the way of being assigned. Various training courses were also organized so as to raise the competence of judges, and judicial references have been compiles in tune with the Eritrean culture.

The participants of the meeting put forth views focusing on several issues.