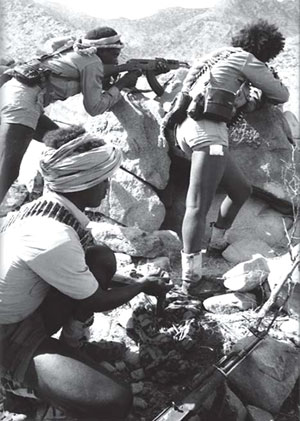 All the offensives that have conducted by the enemy with the advice of Soviet generals have been to destroy the Eritrean revolution once and for all. The Derg used the two and half years after its foiled fifth offensive to prepare itself for a bigger invasion that it named “Red Star Campaign”. Simultaneously the EPLF leadership was well aware of the intension of the enemy and has been well prepared for any eventuality in all possibilities.

The two and half years of preparation gave the enemy ample time to make extensive political, economic and diplomatic preparation for its highly publicized “Red Star Campaign”, which it planned to be a final and winding military campaign against the Eritrean armed struggle. Just before the offensive was launched, the Derg made sure that the necessary re-enforcement was made on its units in Eritrea. Consequently it equipped its army with new arms and more than enough ammunitions. It also renamed its military units Wuqaw, Metir, Nadew, etc. in a bid to boost the moral of the army.

During this offensive the Derg had mobilized an army of 120,000-well trained and equipped. 60,000 out of which had been assigned to directly march to retake Nakfa, while the 20,000 were stationed in Barka,7,000 in Halhal front as a backup and the remaining around 22,000 has been given the order to attack the North-Eastern Sahel front. The enemy forces that have been stationed at the North-Eastern Sahel front were met by the strong resistance of the EPLF

combatants and their mission doomed before it began.

The enemy forces that have been stationed at the North-Eastern Sahel front were well equipped with all means of armory and its soldiers with a confidence that no force could come and displaced them but rather with a power to destroy the Eritrean liberation fighters. The reality, however, had been to the contrary. The big enemy forces had been routed out from the area within few days to the surprise of the enemy leadership and its army commanders.

On February 22 1984 the EPLF forces launched a surprise attack on the enemy forces at the North-Eastern Sahel front. However due to some problems in coordination the offensive failed to hit its target. The failed offensive had to be thoroughly assessed and mistakes corrected and another attack planned. The combatants who participated in the offensive could not swallow the defeat and were more than ever ready to retaliate. And the EPLF commanders decided they would attack the enemy within one month of the failed attempt.

The enemy on its part had been dead sure that the EPLF would attack very soon and they on their part made sure that they are prepared for any eventuality. Both the EPLF and the enemy began preparations of their own.

Exactly after one month the EPLF offensive began at around 12:30 PM at a time during which the enemy has not been expecting. With a short period of time the first line of the enemy strong hold has been broken. Consequently the second defense line had been also easily penetrated to the astonishment of the combatants that have been expecting some resistance.

The final war plan had been to destroy the command post of the enemy and here strong resistance had been expected. The enemy resisted for about five hours but finally gave up. And the enemy command post at Awget fell on the hands of the EPLF fighters.

The enemy lose during this offensive has been estimated to be 6000 soldiers killed, 15 tanks, 7 armored vehicles, 6 anti-tank batteries, more

than 20 heavy artillery, more than 80 military vehicles, substantial amount of fuel and foodstuff and more than 35000 light arms feel in the hands of the combatants.

The demise of Wuqaw Iz has been the turning point of the military balance favoring the EPLF. Moreover,

The demise of Wuqaw Iz had been one of the many failed enemy offensives that brought the moral and combat appetite of the enemy to zero. And that brought the inevitability of the defeat of the enemy. It has been only a matter of time. On the other hand it boosted the moral of the liberation fighters and the psychological confidence that no enemy forces could deter their advance for the final show to liberate the country.

The enemy forces as a final show launched what it called the “Red Star campaign” popularly known as the sixth offensive by the EPLF. This offensive testified the resilience, courage and determination of the EPLF combatants. And that, like the other enemy offensives, miserably failed opening the door for the EPLF to initiate its own offensive and step by step shorten the existence of the enemy on the Eritrean soil.