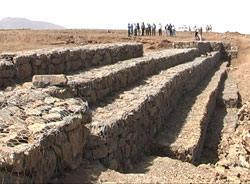 Each year there is a steady progress in all-round development activities that have been carried out in different parts of Eritrea. Health, education, and agriculture sectors are of course the utmost priorities of the county. If one happens to see network of brand new hospitals and medical centers being expanded in different parts of Eritrea, it is quite easy to understand that nothing less is being achieved in other development sectors.

The can do sprit of Eritreans has continued to be the sole secret behind the development achievements that have been registered in different sectors. Like in other parts of Eritrea, a number of water reservoirs of different sizes have been built in different parts of the Southern region. Although  most of Eritrea is dependent on rain fed agriculture, the amount of water that has been impounded in the already constructed dams and other water reservoirs have enabled the country to give due attention to the introduction of irrigation based farm. Owing to endeavors that have been exerted to save every drop of water in the rainy seasons, dams constructed in the Southern region have started to impound encouraging amount of water which is indeed a major reason for the introduction of irrigation based farming activities.

Hence, exemplary agricultural activities have continued to be expanded in different parts of the Southern region. What is quite interesting is that the set out plans are most of the time

A recent visit by Mr. Petin Saint Ange, Regional Director of International Fund for Agricultural Development (IFAD) in the Eastern and Southern Africa, to the Southern region was aimed at personally witnessing the agricultural advances the country has continued to register. A group of agricultural experts headed by Mr. Arefaine Berhe, Minister of Agriculture, and Mr. Efrem Ghebrekrishtos, Administrator of the Southern Region, Mr. Petin, Director of IFAD, has made a tour in different agricultural areas of the Southern region on 4 April 2014.  This group has witnessed that endeavors that have been exerted towards achieving food security has proven to be effective.

Mr. Efrem explained that efforts that have been exerted towards boosting agricultural production such as cattle breeding, installation of drip irrigation around major dams, cultivation of green animal feed, introduction of smokeless oven, and introduction of biogas have been very instrumental in making a difference. Plans are mapped out towards encouraging people so as to make maximum use of the already achieved development programs, Mr. Efrem added.

As reported during the touring event, dairy farm has shown impressive development and drip irrigation that has been introduced around Sememo,

Ziban-Sebo, Harnet, and Adi-baro dams has been making due contribution towards improving living standards of the inhabitants of such areas. The agricultural projects that have been carried out in the aforementioned areas have indeed become sources of an increasing employment opportunity.

The touring group of experts also visited diary and animal feed processing plants in Mendefera. What is more is that the touring group has also observed different soil and water conservation activities that have been carried out in Dubarwa.

“I would not rest until I write 10 books”