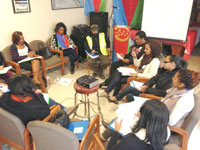 A trainers’ training was organized in Philadelphia city for YPFDJ team leaders in Eastern USA.

The trainees came from Boston, Philadelphia, Harrisburg, New York and Washington cities, and the training aimed at reinforcement of the organization as well as enhancing youth role in the nation-building process.

Mr. Dawit Haile, head of organizational affairs, disclosed that the training was conducted for the sixth time on the basis of annual schedule.

Heading a seminar which was conducted in this connection, Ms. Sofia Tesfamariam called on youths to demonstrate higher sense of diligence against the external conspiracies being perpetrated to erode Eritrean values and national identity.

In the course of the training, the youths conducted discussion on a number of issues, and asserted that they would step up efforts towards the realization of the organization’s goals pertaining to inspiring the awareness, financial and professional capacity, as well as organization of members, besides popularization of cultural values.