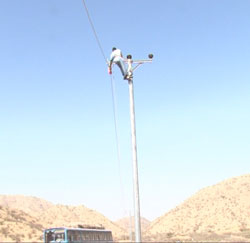 The inhabitants of Enderayeb, Degesey and Engerne Administrative areas, Agordat sub-zone, are extending labor support in a bid to facilitate electrification process in the area.

They further indicated that the communal venture is witnessing active participation of the members of the People’s Army.

Among the inhabitants, Mr. Idris Osman and Ms. Halima Ibrahim said that the popular awareness as regards government endeavors seeking sustainable community development is on the rise, and asserted that they would enhance efforts so as to realize the cherished goals.

Mr. Musa Haj, Administrator of Engene area, explained that the inhabitants of the area previously erected poles for installation of electricity wires through higher enthusiasm, while the current task pertains to cabling.

Mr. Girmai Teklehaimanot, in charge of the task’s follow-up, disclosed that the villages of Adi-Quslay, Atobirhan, Adi-kukey, Adi-Shibot and others in the Administrative area of Tekreret as well as Dige sub-zone would be beneficiaries of the project. He also lauded the active participation of the inhabitants.

Seminar regarding quality, potential and management of underground water in Asmara conducted