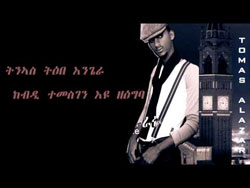 We have a very special guest on this week’s Q&A edition. His name is Tomas Alazar, one of the young artists of Eritrea. His prominent singing has brought him countless fans of different age, from inside and outside the country and the topics he has been rising with his gentle yet exiting melodies are of a wide range. Tomas Alazar has by far written and composed 16 of his own songs and 20 other compositions sang by others. Let’s meet today the man behind fabulous resonances of the kirar, while on the second part we will go in-depth in his musical productions.

-Hello, it is so exiting to have here with us.

Pleasure is all mine, thanks for having me!

-Will you kindly, introduce yourself to our readers? … And it would be nice if you could share a bit of your childhood with us?

Sure, my name is Tomas Alazar and I was born in 1986 in Asmara on the suburbs of Haz-Haz. I went to school nearby my neighborhood and then finished high school in Sawa. Honestly I was not too good of a student, I hated doing homework and studying. But I think music was in me even before I knew it, I used to accompany any random melody to the poems I had to memorize. I loved singing and listening to music. Aafter high school I set my path right once and for all, I knew I was going to do music for the rest of my life. And I think I was born lucky enough as I am still doing what I love the most.

-When exactly did you start doing music permanent level?

Hum… soon after high school, I started doing my national service and joined one of the army music troupes in 2007. Back then those whom would get a pass mark in the high school matriculation, would be given a chance to develop their academic eminence based on their passion and talent. And I, as I failed the assessments I was given a second chance to learn and eventually work doing what I am good at the most.
-Before your debut, you were well-known for…

Kirar. I loved playing that instrument ever since I was kid, way before I started singing. You know how in neighborhoods people gather up and play music in the corners of the vicinities, I was big fan of those jamborees. I used to sneak out from my house without my mom finding out. That is when and where I learned playing the instrument, obviously I didn’t know how to read the notes but I was good, so good actually. I had a blind passion for it.

-How did it feel to be preform on stage?

I don’t want to sound like am bragging but I wasn’t nervous or utterly exited.
-But it was your first time…
I know. And I had quite big of an audience but it felt natural. I felt like I belonged on that stage, I will never forget the feeling I had that day. It was very encouraging. Music was the only thing I knew and was confident about.

-You still do use your kirar for accompaniment, don’t you?
I do. Simply because I feel a lot more comfortable and confident. I let the strings and the velocity of my fingers do take on the magic. Not to forget that kirar has the ability of producing soulful and dynamic resonances.