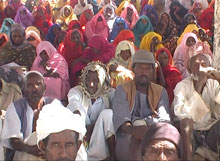 Speaking on the occasion, Mr. Osman Arafa, Administrator of Mogolo sub-zone, pointed out that the conducting of such election is in line with the government’s endeavors as regards ensuring sound public administration nationwide, and asserted the Administration’s readiness to collaborate with the new elects. He further called on them to put up stepped-up efforts towards the realization of the cherished national development goals, besides demonstrating excellence in the new responsibilities they have assumed.

The new elects voiced readiness to serve the community with dedication and faithfulness, and called for higher collaboration on the part of the sub-zonal Administration and fellow inhabitants.