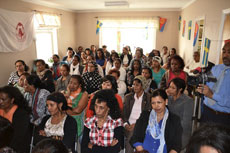 Members of the NUEW in Sweden conducted 2nd conference in Stockholm city.

Speaking at the meeting in which more than 40 representatives of the Union in the country took part, Ms. Kedija Ahmed, Chairperson of the branch, pointed out that the members demonstrated enhanced role as regards putting an end to external conspiracies and safeguarding the nation’s dignity on the basis of higher organization and harmony. She further gave briefings regarding related activities of the branch vis-à-vis the challenges encountered.

Mr. Yonas Mana, Charge de’Affairs in the Eritrean Embassy in Scandinavian Countries, said that the branch should exert stepped-up endeavors towards popularization of the historic feats demonstrated by Eritrean women with a major focus on the young generation. He also lauded the steadfastness of the members of the branch office vis-à-vis their participation in State affairs.

Moreover, the participants of the meeting exchanged views regarding several issues, and elected a managing committee that would serve for 3 years.