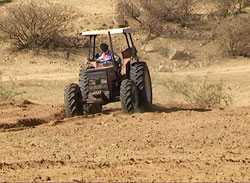 Mendefera, 25 April 2014 – Reports indicated that extensive community preparations are being conducted for rain-fed farming in Tserona, Mendefera, Dekemhare and Adi-Quala sub-zones witnessing active participation of the members of the People’s Army.

Mr. Ziena Girmai, irrigation development expert in Tserona sub-zone, disclosed that the community members have rented machineries and are extending labor for the fulfillment of the task, while prevention of alluvial deposits in micro-dams becomes one of the popular venture’s point of focus.

Mr. Michael Siyum, head of economic development in Dekemhare sub-zone, stated that the ongoing communal campaign also focuses on prevention of erosion along the banks of the river flowing along the suburbs of Dekemhare city.

Moreover, the community program in Mendefera sub-zone is aimed at ensuring food security including that of animals, and the participation of the inhabitants is commendably high, according to Mr. Maekele Tesfamichael, head of economic development in the locality.

Mr. Berhane Woldesilasie, head of economic development in Adi-Quala sub-zone, said that the inhabitants set up a committee with a view to coordinating the community-led undertaking and raised fund for renovation of a dirt road.