Prehistory and history of Eritrea 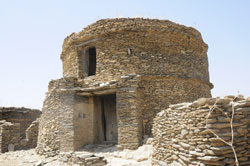 It is evident that Eritrean prehistory is as old as humanity and superbly endowed with archeological and paleontological remain spanning all temporal segments in the human career, that are believed to be the cradle of early hominids and large-sized mammals. The discovery of new hominid evidence in the Buya area (Northern-Danakil Depression), that is a one million year old hominid cranium. This paleontological area has global significance to the reconstruction paleoenvironmental and hominid behavior research.

Eritrea has been inhabited since antiquity; the first inhabitants were the Nilotic people from the Nile. The Cushitic arrived with successive waves of Hamitic stock and the south Arabian tribes introduced the Semitic culture. The Semitic language evolved into Ge’ez from which Tigre and Tigrigna originated. In the 4th Century AD, Christianity was introduced. During the early Islamic period, the trail of Sahaba was established when a group of Mohammed’s companies

(Sahaba) travelled from Mecca to Massawa and beyond the hinterland to escape persecution.

The 16th century was marked by continual attempts of the Turks to extend their influence on the Eritrean coast. The Italian colonizers landed in Massawa in 1885. The Italian colonial era lasted until 1941 when they were defeated by the British who, in turn, governed Eritrea until the United Nations decided Eritrea’s future, which was to make it an autonomous unit federated with Ethipia. Due to this decision the first organized Eritrean resistance was established in 1958, followed by the start of an armed struggle in 1961 and the annexation by Ethiopia in 1962, which ended when Eritrea won its independence in 1991.