High school worth around 35 million Nakfa constructed in Sembel 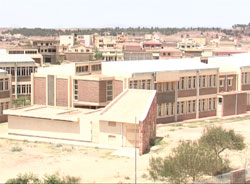 A high school worth of around 35 million Nakfa has been inaugurated in Sembel sub-zone on 26 April.

Asmara, 27 April 2014- A high school worth of around 35 million Nakfa has been inaugurated in Sembel sub-zone on 26 April.

In a speech she delivered during the occasion, Ms. Sitom Seid, administrator of Sembel sub-zone, said that the construction of the school has been the continuation of the endeavors by the Government to ensure equal distribution of schools in the country, and called on parents and students to make judicious use of the school.
Mr. Mesfun Mehari, from the office of infrastructure in the region, indicated that the high school has been constructed by the regional administration and it includes 48 class rooms, 4 laboratory rooms, 3 computers rooms, a meeting hall, library and teachers’ office.

Mr. Belai Habtegabir, representative of the Education Ministry, on his part said that the construction of the school would have significant contribution in the increase of female students school enrollment, and that the school could accommodate 5 thousand students.

The participants explained that their children had to travel long distance to attend school, and with the contsuction of the school in their back yard their problem has been solved.