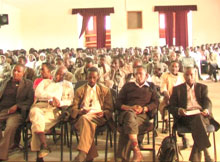 Members of the Association branch of dairy farmers in Medefera sub-zone have asserted readiness to boost production.

Mendefera, 28 April 2014 – Members of the Association branch of dairy farmers in Medefera sub-zone have asserted readiness to boost production. They made the remark at an assessment meeting which was conducted last Wednesday in Mendefera city, during which it was stated that more than 1 million liters of milk could be distributed by them to Asmara, Debarwa, Dekemhare, Massawa and other cities.

Speaking at the meeting, Mr. Niguse Haile, Chairman of the Association in the Southern region, stated that it is witnessing increasing momentum and effectiveness vis-à-vis activities thanks to individual efforts of members and committee members.

Also speaking at the meeting, Mr. Abraham Hagos, Administrator of the sub-zone, noted the vitality of objective assessment of activities and identification of weak sides for a still more gratifying outcome, and expressed the Administration’s readiness to collaborate with the Association’s branch.

Moreover, Dr. Ogbazgi Kifle, head of the Agriculture Ministry’s branch in the region, explained that effective management constitutes the secret behind the remarkable accomplishment of the

Association, and urged the farmers to put up sustained endeavors for higher productivity. He also asserted that the branch office would continue to collaborate with them.