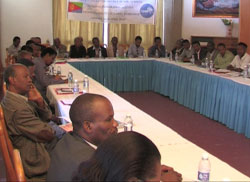 A seminar has been opened yesterday in Asmara city on the basis of a joint initiative between the Eritrean Ministry of Trade and Industry as well as COMESA.

Asmara, 29 April 2014 – A seminar has been opened yesterday in Asmara city on the basis of a joint initiative between the Eritrean Ministry of Trade and Industry as well as COMESA.

Speaking at the seminar in which around 40 individuals from governmental and non-governmental organizations are taking part, Ms. Zeferewerk Fisehaye, Head of international relations in the Ministry, expressed conviction that the training would serve as a stepping stone for COMESA member states to implement programs of the organization as well as the resolutions of the Ministerial Assembly thereof.

She further explained Eritrea’s readiness to implement COMESA’s programs vis-à-vis the efforts it is making to this end, and stated that this attests to the nation’s commitment towards attaining economic development based on regional and international economic integration.

Representing COMESA, Mr. Zerizgi Keleta disclosed that the seminar would focus on issues bound to the organization’s priorities such as integrating customers and trade activities, as well as free zones. Our organization is exerting efforts towards raising the human resource capacity of the member states in a bid to ensure effective implementation of cherished goals and laying groundwork for efficient harnessing of trade resources, he added.

Mr. Zerizgi went on to indicate that Eritrea is one of the founding member states of COMESA, and that it imposed an 80% tax reduction so as to encourage exchange of trade activities among the member states. He also outlined Eritrea’s active role in this regard, and said that the training is due to give impetus to its participation in the organization’s free zone activities.

The training would continue until April 30.

COMESA comprises a total of 19 member states, and 13% of Eritrea’s trade activities are associated with them, according to reports.