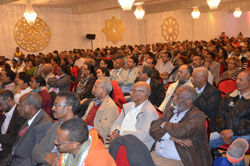 Asmara, 30 April 2014 – The Eritrean community members Central Germany have reiterated readiness to step up participation in national development activities. They made the pledge last Sunday at a meeting in Frankfurt city, during which they further expressed appreciation for the pace of the ongoing development programs in the Homeland.

They further asserted readiness to prove higher participation for the realization of the cherished national development goals through higher communal harmony.

all over the country, and pointed out the need for ensuring stepped-up popular efforts as regards safeguarding the nation’s sovereignty and giving added impetus to the nation-building process.

Also speaking at the meeting, Semhar Tekeste and Tedros Goitom from the YPFDJ’s Executive Committees in Europe, as well as Helen Tesfalem, YPFDJ member in Frankfurt, gave briefings focusing on the organization’s activities at continental level and its future plans.

The meeting witnessed the conducting of seminars focusing on essence of the concept of human rights vis-à-vis the UN and its mission, as well as the issue of culture in light of the Eritrean identity.