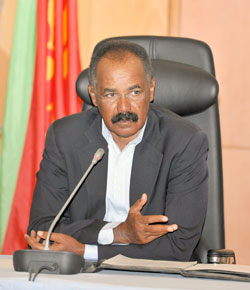 A meeting of the Eritrean Cabinet of Ministers conducted today, 30 April, at State House.

Asmara, 30 April 2014- A meeting of the Eritrean Cabinet of Ministers conducted today, 30 April, at State House.

The Cabinet of Ministers in its session extensively discussed progress of 2014 development programs on the basis of short, medium and long term programs and especially on the programs aimed at ensuring food security and availability of basic consumer goods.

In his opening speech, President Isaias Afwerki indicated that economic indications are portrayed with productivity, distribution and consumption, and that the basic activities in the agricultural sector would have to be balancing productivity with consumption and minimizing food imports and increasing export. He further explained on the undergoing activities to put in place agricultural infrastructure, developing water resources as well as ensuring the supply of machinery and other supplies for agricultural development. The President also outlined that as continuation of the ongoing national projects to develop water resources in different areas of the country, there are big projects for 2015 to make use of the rivers flowing through the eastern lowlands.

Mr. Arefaine Berhe, Minister of Agriculture, also presented his deliberation with regards the short, medium and long term agricultural programs of 2014. In his deliberation, Mr. Arefaine indicated that the distribution of rainfall during the small rainy season has been good in many parts of the country, and that according to the rainfall forecast the rainfall distribution in the coming big rainy is expected to be satisfactory. He further presented on the activities being exerted on soil and water conservation national programs and ensuring the supply of machinery and other resources.

Mr. Woldemicael Abraha, Minister of Zonal Administration, on his part outlined the agricultural development programs for the coming rainy season. He further explained on the activities being conducted to finalize the restructuring, work directives, responsibilities of departments and branches of regional administrations as well as the activities being undertaken by the National Task Force to finalize the restructuring programs.

The Ministerial Cabinet noted the action programs presented by President Isaias and the Ministers of Agriculture and Zonal Administration and conducted extensive discussion on the charted out programs and especially on creating job opportunities, nurturing youth equipped with good societal values and work ethics, resettling people living at non-arable land to agricultural suitable areas. The Ministerial Cabinet also discussed on strengthening activities to ensure food security and supply of machinery, and called on the public to reinforce participation for the success of the 2014 national development programs.

In the closing of the half day meeting, the Ministerial Cabinet gave important guidelines and directives for the success of the national development programs.