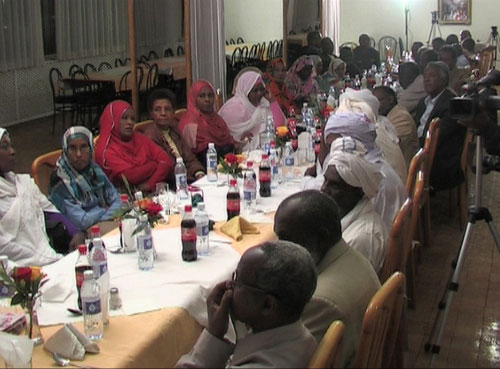 The National Confederation of Eritrean Workers (NCEW) pointed out that it would further development activities in connection with the marking of the International Workers Day on May 1at national level for the 23rd time.

Asmara, 01 May 2014 – The National Confederation of Eritrean Workers (NCEW) pointed out that it would further development activities in connection with the marking of the International Workers Day on May 1at national level for the 23rd time.

Speaking at the ceremony conducted thereof at Bahti-Meskeren square in the presence of senior government and PFDJ officials, diplomats and representatives of the Workers Association of the Republic of Sudan’s branch in Khartoum region, Mr. Tekeste Baire, Secretary General of the Confederation, stated that the organization would continue exerting stepped-up development endeavors keeping intact the labor laws and other factors that encourage the culture of work.

He also said that the government of Eritrea has been putting up continued efforts in a bid to nurture a society where social justice prevails, besides the fact that the Labor Proclamation issued in the early years after national independence has laid groundwork for Eritrean workers to raise awareness regarding their obligations and rights, as well as play pivotal role in the nation-building process through becoming primary beneficiaries of resources.

Mr. Tekeste went on to indicate the vitality of labor as a determinant factor for peoples’ living standard vis-à-vis the role of workers in general pertaining to securing a conducive world. “And hence the commemoration of this significant event worldwide,” he added.

The ceremony also witnessed delivery of speeches by the Head of Political Affairs at the PFDJ, Mr. Yemane Gebreab, representing the People’s Front, Mr. Woldeyesus Elisa, representing the Ministry of Labor and Human Welfare, Mr. Yemane Tesfai, as well as Chairman of the National Employers Association, besides the solidarity message of the Assembly of Khartoum region’s Workers Association.

Meanwhile, the branch of the NCEW in the Central region signed a mutual agreement as regards raising production capacity of workers with the Workers Association of the Republic of Sudan’s branch in Khartoum.

The agreement was signed at a dinner hosted in honor of the members of the Sudanese Workers Association comprising 30 members who took part in the ceremony at Bahti-Meskerem square. It was also stated that the agreement reached is in line with the active relations of partnership between various regions of both countries.

Mr. Eyob Kinfe, member of the Confederation’s executive committee, explained that the relation between Eritrea and the Republic of Sudan is anchored on the strong ties between the two people.

Mr. Ahmed Mahjub, Vice chairman of Khartoum region’s Workers Association, on his part expressed appreciation for the warm welcome accorded them, and made note of the vitality of the agreement vis-à-vis raising the capacity of employees. He also asserted that they would demonstrate active work for its implementation.

In the course of its stay in Eritrea, the Sudanese group visited production establishments in the Central region.