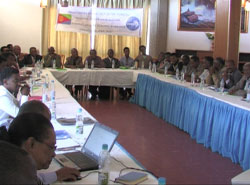 Regional and international economic integration as a key factor to a nation’s economic development is Eritrea’s guiding principle. To do this, the country has been fostering ties with a number of different regional and international economic partners so as to pave a way for mutual benefit that is guided by a win-win strategy. Such far sighted vision of the country and its partners steams from a common goal of securing a region that is economically stable and where complementary is the sole secrete towards a sustainable advance. Implementation of programs mapped out by COMESA member states could, however, not be achieved without investing in human resource capacity building. It is in this view point that a workshop focusing on human resource capacity building organized by the Eritrean Ministry of Trade and Industry as well as the Common Market for Eastern and Southern Africa (COMESA) was conducted for three days in Asmara from 28 to 30 April 2014.

In this recent workshop around 40 individuals from governmental and non-governmental organizations took part and discussed on issues that focused on the implementation of programs as well as resolutions of the organization’s Ministerial Assembly.

Present in the occasion Ms. Zeferewerk Fisehaye, Head of international relations in the Ministry, explained Eritrea’s readiness to implement COMESA’s programs besides the efforts it has been exerting towards the realization of the set out goal. Ms. Zeferewerk’s remark indeed attests to the nation’s commitment towards attaining economic development based on regional and international integration.

The issues discussed in the workshop were mainly focused on the organization’s priorities which include integration of customers and trade activities as well as free zones.

Representing COMESA, Mr. Zerizgi Keleta said “Our organization is exerting efforts towards raising the human resource capacity of the member states in a bid to ensure effective implementation of cherished goals and laying groundwork for efficient harnessing of trade resources.”

As an effective regional trade activities could be facilitated through active engagement of all COMESA member states and collective initiatives that would be taken to that end, Eritrea has taken different initiatives to enhance its role in the development of the regional organization.

As regards the initiatives taken by Eritrea, Mr. Zerizgi indicated that Eritrea is one of the founding member states of COMESA, and that it imposed an 80% tax reduction so as to encourage exchange of trade activities among the member states. He also outlined Eritrea’s active role in this regard, and said that the recently organized training is due to give impetus to its participation in the organization’s free zone activities.

It is to be noted that COMESA comprises a total of 19 member states, and 13% of Eritrea’s trade activities are associated with this regional organization. The workshop mainly dealt with the plans of COMESA, advantages and challenges of free zone, origin of goods and regulations, the African organization’s regulations regarding primary imports from Eritrea, as well as non-tariff trade quandaries, among others.

According to the participants of the workshop that continued for three days, the training organized by Eritrea and COMESA would have a positive impact in facilitating and reinforcing economic integrity and mutual cooperation activity among different countries that are members of the organization.